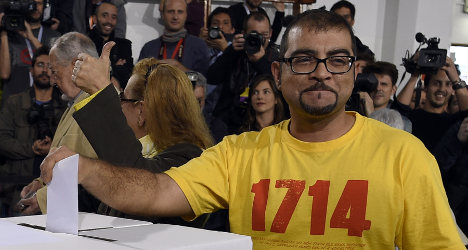 A voter during Catalonia's symbolic poll on the issue of independence from Spain on Sunday. Photo: Lluis Gene/AFP

With all the ballots counted in Catalonia, the total number in Sunday's poll reached 2,305,290 in the region of some 7.5 million inhabitants, it said in a statement.

Catalans pushed ahead with the symbolic vote in defiance of legal challenges from Madrid which stripped of legal force their initial plan for an official non-binding referendum.

The ballot papers posed two questions: "Do you want Catalonia to be a state?" and if so, "Do you want that state to be independent?"

According to Monday's results, 80.76 people answered 'yes' to both questions — 1.86 million overall.

Those ratios did not include the 13,573 people who have voted so far at polling stations overseas, where ballots will remain open until November 25th.

It was not a surprise that most of the people who turned out on Sunday were in favour of independence, since those opposed to it were — like the Spanish government — fiercely opposed to the vote.

Some 5.4 million Catalans and resident foreigners aged over 16 were eligible to vote, the regional government said, though some analysts estimated the figure at closer to six million.

Although the vote was not legally endorsed and lacked an official electoral roll, Monday's results roughly indicated that nearly a third of people in Catalonia population were actively in favour of independence, as reflected in mass demonstrations over recent years.

But analysts said the turnout did not show there was enough support for outright independence but it strengthened the hand of Catalan president Artur Mas in his showdown with Spain's Prime Minister Mariano Rajoy.

"If we see this as a five-set tennis match, yesterday was the first set which Mas won. Now starts the second set and it depends on Mariano Rajoy," said Gabriel Colome, political science lecturer at Barcelona's Autonomous University.

The total number of votes in favour of independence was less than the number cast in the last regional elections in 2012 for the four Catalan nationalist parties which called the referendum, he added.

"They expected to get much more. This means that in a hypothetical real referendum they have a problem," Colome told news agency AFP.

If Mas opts to hold early elections, the symbolic referendum results indicate that nationalist parties will not be able to secure a majority in the regional assembly that would allow them to unilaterally declare independence as some have proposed, he added.

While Madrid called Sunday's vote a "useless" and "sterile" exercise, Catalan parties have already begun to jockey for position on a possible next step in the region's independence process.

The two parties of the region's ruling Convergence and Union coalition on Monday offered opposing views, with the larger CDC party, led by Catalan president Artur Mas, saying plebiscite-style regional elections would be "more than probable" within two weeks if Madrid did not enter into serious negotiations, Spain's El País newspaper reported.

Its coalition partner, the UDC, meanwhile, has stepped away from the idea of elections and wants to get on with the business of governing, the daily added.

Meanwhile, the most powerful opposition party in the region, the left-wing republican ERC party on Monday called for constituent elections in Catalonia which would then lead to the formation of a unity government as part of a transition towards independence, according to Spain's 20 minutos newspaper.

The ERC have previously said they want to see an independent Catalonia by the end of 2014.

However, it could prove difficult for the ERC to join forces with the Convergence and Union coalition in a push towards independence for Catalonia.

Relations between the two have been strained over Mas's handling of the November 9th vote, with the Catalan president backing away from original plans for a non-binding referendum in favour of Sunday's symbolic vote.