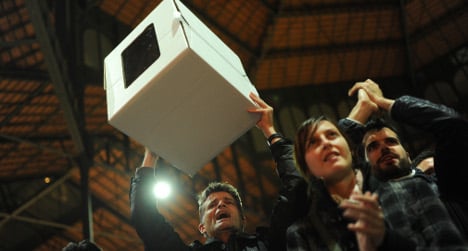 A pro-independentist holds up a ballot box after a symbolic vote on independence for Catalonia from Spain at a polling station in Barcelona on Sunday. Photo: AFP

Catalan preside Artur Mas called the vote, not sanctioned by Madrid,  "a total success" after a large majority of those who took part supported independence.

The vote "made it very clear that we want to govern ourselves," he said.

In Barcelona and other cities voters of all ages lined up around the block, some applauding, as polling stations opened after weeks of tense legal wrangling with Spanish authorities.

Voters were asked for their response to two questions. The first was: "Do you want Catalonia to be a state?". If answered affirmatively, the ballot paper posed a second question: "Do you want that state to be independent?".

There was no official electoral roll but the regional government said 5.4 million Catalans and resident foreigners aged 16 were eligible to vote in the referendum which was organized by thousands of volunteers.

"People believed that they could decide their future and they turned out en masse," said Xavier Bardolet, 44, as he voted in the town of Sant Pere de Torello about 90 kilometres (50 miles) north of Barcelona.

The poll was held in the face of fierce opposition from the Spanish government, and despite a constitutional court ruling to suspend the exercise.

"The government considers this to be a day of political propaganda organized by pro-independence forces and devoid of any kind of democratic validity," he said in a statement.

State prosecutors were continuing to investigate whether Catalan authorities breached court injunctions by opening polling stations in schools and other public buildings to "assess the existence of criminal liability", he added.

Catalan leaders admit the vote has no direct legal consequences, but hope the high turnout will bolster their political case with both Madrid and other European governments.

Mas said his government would now push to hold an official referendum and would seek international support to help convince the Spanish government to let it go ahead.

"We deserve to vote in a legal and binding referendum and this is what we are  going to try to do," he added.

Mas had originally planned to hold an official yet non-binding vote on independence, inspired by the referendum held in Scotland in September which resulted in a "No" vote.

But the Spanish government's legal challenges forced him to water that down.

Proud of its distinct language and culture, Catalonia, a region of 7.5 million people, accounts for nearly a fifth of Spain's economy.

Demands for greater autonomy there have been rumbling for years, but the latest bid by the region's president Artur Mas has pushed the issue further than ever before.

Rajoy 'not in charge

"It shows that Catalans want to vote. But it is a long way from showing that they want independence," he told news agency AFP.

By successfully getting the court to suspend the vote and then not enforcing its ruling, (Spanish Prime Minister Mariano) Rajoy has shown "he is not in charge", added political analyst Josep Ramoneda.

"This is going to cost him because some on the right and in business circles will see him as a spent force," he told AFP.
Grass-roots independence groups that have pushed for an official referendum, collected signatures at polling stations on a petition that will be sent to the United Nations and the European Commission asking for their help to convince Spain to let Catalonia hold an official referendum.

Final results of the symbolic vote will only be published at the end of the month.