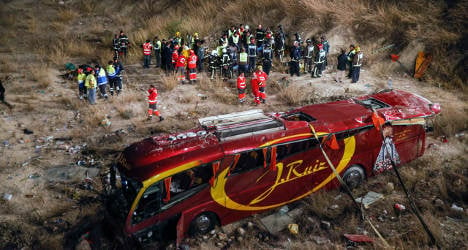 Rescue crews end emergency personel stand near a bus that crashed off the highway near Cieza, Murcia killing 14 people and injuring at least 30 more. Photo: AFP/STR

The coach left the road and plunged into a ravine in the Murcia region just before midnight on Saturday.

It was carrying passengers to their home village of Bullas back from the capital Madrid, where according to media they had been to a church ceremony.

The driver was charged with homicide and negligence, the prefect of the region, Joaquin Bascunana, told the media, adding that it was thought the bus was travelling too fast.

The driver and his colleague tested negative for drugs and alcohol, he said.

Spanish media cited passengers saying that the driver had shouted before the crash that the coach's brakes were not working properly.

Ten of those on board, including Bullas's local priest, died in the crash and four others died later in hospital, the regional government said.

At least 30 other people were injured, 10 of them seriously, Spanish media reported.

More than 200 emergency workers rushed to the scene and worked through the night tending to the wounded, the regional government said.

The mayor of Bullas, Pedro Chico, told reporters that some residents of the town had lost several family members in the crash. The regional authorities decreed three days of mourning.

Spain's royal palace said King Felipe VI and Queen Letizia would attend the funerals for the victims on Monday.

It was the worst coach accident in Spain since 2001, when 19 retirees died in a crash near Huelva in the southwest of the country.

Spanish authorities have cracked down on road safety in recent years by increasing fines and launching shock road safety campaigns in the media.

The number of deaths on Spain's roads plunged by 72 percent between 2003 and 2013, the interior ministry said in January.