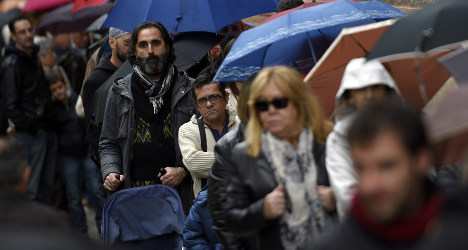 People outside a polling station in Barcelona on Sunday, prior to a symbolic vote on independence of Catalonia from Spain. Photo: LLuis Gene/AFP

A total of 1,977,531 of the 5.4 million people aged over 16 registered as living in Catalonia and entitled to vote had done so aged by 6pm, or two hours before polls were due to close, the Catalan government said. Most of those votes — 1.228.940 — were in Barcelona the figures showed.

Results are expected on Monday.

The turnout figures are key as the Catalan government tries to lend credibility to a symbolic poll which Spain's central government in Madrid says means nothing. Earlier regional government figures on turnout up to 1pm were dismissed by Madrid as "having no validity".

Voters in Catalonia formed long queues outside polling stations on Sunday with some applauding as the ballots opened, after weeks of tense legal wrangling with Spanish authorities.

One of Spain's richest but most indebted regions, Catalonia's long-standing yearning for greater autonomy has swelled in recent years of economic hardship, sharpened by resistance from Madrid.

"This is an opportunity we could not miss… We have been demanding it for a very long time," said Martin Arbaizar, 16, queueing to vote at a polling station in a school in Barcelona.

The Spanish government challenged the vote in the courts, forcing Catalan leaders to adapt it from an official but non-binding referendum to a symbolic vote organized by volunteers.

"Even though it may not be official, I think the important thing is that they listen to us," said Arbaizar. "The more people vote and the more noise we make, the better."

Spain's conservative Prime Minister Mariano Rajoy says his country cannot hold an independence referendum like Scotland because, unlike Britain, it has a written constitution that forbids it.

Rajoy had on Saturday downplayed the importance of the vote during a speech to supporters of his conservative Popular Party in the eastern city of Caceres.

"What will take place tomorrow, we can call it whatever one wants, but it is not a referendum, not a consultation, nor anything that resembles it, I can't even qualify it. What is certain is that it will not have any effect," he said.

Waiting in line in NYC to cast the most important vote of my life on Catalonia's future #9N pic.twitter.com/C4ISwtSDof

On Sunday, the government in Madrid went a step further, calling the vote "anti-democratic" and "useless", according to sources quoted by Spanish news agency Europa press. Those sources added the behaviour of Catalan president Artur Mas would make future relations between the central government and Catalonia more difficult.

But speaking on the day of the vote, Mas described the unofficial vote as a step towards a definitive referendum on the issue of independence for Catalonia from the rest of Spain.

"After everything we've done, we've earned the right to a definitive referendum, if possible one agreed with the state," he said after voting in the poll.

Mas also talked down a lawsuit filed jointly by Spain's centrist and strongly anti-nationalist UPyD party and the Plataforma per Catalunya, who accused the Catalan government of disobedience and perversion of justice for staging the vote in the face of challenges from Madrid.

At 9am on Sunday the groups had asked a Barcelona court to suspend the vote and arrest its organizers. They also asked for the closure of all public buildings where the vote was being held — using force where required — and for the seizure of material used. In addition, they requested the detention of volunteers involved in the vote who refused to identify themselves when asked.

However, a judge later rejected the appeal from the UPyD describing the measures as "disproportionate".

In response to orders from the state attorney for Catalonia's regional police force to provide details about public locations being used to stage the vote, Mas said: "If the public prosecutor wants to blame someone, it should be me."

The Catalan president also said names of education workers who had allowed access to voters would not be provided to police as the vote was being held on a Sunday and the people carrying out these acts were volunteers.

While voting on Sunday was generally peaceful, a group of people tried to destroy ballot boxes in the town of Girona, with two being arrested according to regional daily La Vanguardia.

In another incident, some 50 right-wing protestors burned a Catalan independence estelada flag outside the government delegation in Barcelona, national daily El Pais reported.

Spain's major opposition party the Socialists on Saturday responded to the Catalan poll by promising an overhaul of Spain's constitution that would pave the way for greater regional powers for a Catalonia within Spain.

The country's new Podemos party, meanwhile, has maintained silence when it comes to Sunday's vote.

Proud of its distinct language and culture, Catalonia, a region of 7.5 million people, accounts for nearly a fifth of Spain's economy.

Demands for greater autonomy there have been rumbling for years, but the latest bid by Mas has pushed the issue further than ever before.

Catalonia took a step towards greater autonomy in 2006 when it formally adopted a charter that assigned it the status of a "nation". But in 2010 the Constitutional Court overruled that nationhood claim, fuelling pro-independence passions.

Spain's recent economic crisis has increased unemployment and hardship in the region and swelled its debts, but in 2012 Rajoy rejected Mas's request for greater powers for Catalonia to tax and spend.

In response, Mas vowed to hold an official yet non-binding vote on independence, but the Spanish government's legal challenges forced him to water that down.

Sunday's polls will be staffed by volunteers. There is no official electoral roll but the regional government says 5.4 million Catalans and resident foreigners aged 16 and over are eligible to vote.

The ballot papers will put two questions to voters: "Do you want Catalonia to be a state?" and if so, "Do you want that state to be independent?"

Over the recent weeks of legal wrangling between Madrid and Barcelona, the tone in the dispute has sharpened.

Catalans have banged pots and pans on their terraces over the past few evenings in protest at Madrid's intransigence.

Mas has dubbed Madrid "the adversary" and urged Catalans "not to be afraid" and to vote "in legitimate defence of a whole people".

On Friday Spain's Deputy Prime Minister Soraya Saenz de Santamaria issued a veiled warning to Mas, advising "reflection" and cautioning against considering oneself "above the law".

But in the last tense few days before the vote, signs also emerged that the two sides were seeking to sidestep a confrontation.

A source in Mas's government said it would to leave the running of the vote to some 41,000 volunteers who have signed up for the job.

Spain's Justice Minister Rafael Catala on Thursday said that as long as the Catalan government takes a back seat, "no one will prevent citizens from exercising their freedom of expression".

Saenz declined to say what action Madrid might take if Mas's government defied the court's rulings by taking part in organising the vote, but she cautioned Mas against letting ordinary citizens "take responsibility for this process".

Critics say Sunday's symbolic vote is meaningless since those who take part will be overwhelmingly in favour of independence.

But a big turnout would strengthen the hand of Mas, 58, in trying to get Spain's conservative Prime Minister Mariano Rajoy to negotiate with him.

With results expected on Monday, Mas has said he will later write to Rajoy to ask for fresh talks on a possible fiscal pact — or even an authorized referendum.