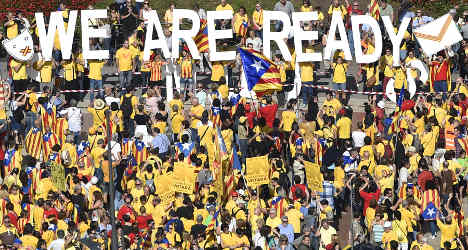 Knocking on neighbours' doors in central Barcelona, 46-year-old engineer Jaime Gutierrez and retiree Toni Vinas, 74, are out canvassing their fellow Catalans to vote Yes to independence from Spain.

Going door to door in the neighbourhood around the city's Sagrada Familia Cathedral, they are just two of the many volunteers mobilized for the ballots in the Catalonia region on Sunday in defiance of legal challenges by Madrid.

Gutierrez has always been in favour of independence. Now he is channelling that yearning as a member of the Catalonia National Assembly (ANC), the northeastern region's most powerful separatist lobby.

"We have to all get out on polling day, queue at the voting stations and show that we will not give up," says Gutierrez.

"Independence used to be a utopian dream for me. Now it seems not just possible but necessary too. This is me doing my little bit," he adds, ringing at a door.

SEE ALSO: Catalonia could be the shock Spain needs

It is opened by Gina Puig, a 34-year-old social worker with her infant son in her arms. She welcomes the ANC volunteers.

"What they have done is really great," she says. "Out of nothing, they have managed to get the whole country out into the street."

Puig doesn't take much convincing by the canvassers: she has already decided to cast a vote for independence on Sunday.

"We would be a smaller country, but a richer and a fairer one," she says.

The assembly grew from a movement that carried out a series of smaller-scale public votes in hundreds of towns across Catalonia between 2009 and 2011.

Over the past three years it has brought hundreds of thousands of protesters onto the streets in mass rallies for the right to vote on independence, giving political leaders the momentum to push ahead with Sunday's vote.

Four years ago, only a fifth of those polled among Catalonia's 7.5 million inhabitants favoured independence, according to polls. But a surge in pro-independence feeling since has seen regional president Artur Mas pushed towards calling Sunday's vote.

He has shrugged off legal challenges from Madrid which fiercely opposes secession, vowing to push ahead with a symbolic non-binding vote — despite other pro-independence parties in the Catalan parliament viewing the new watered-down version of the vote as an unwanted compromise.

While Mas has faced off against the Spanish government, the ANC and the Catalan cultural group Omnium have become the popular face of the movement, marshalling support in the street.

Led by the linguist and activist Carme Forcadell, the ANC says its revenues come purely from members' subscriptions and selling merchandise — such as the masses of red and yellow T-shirts worn in its last mass rally on September 11th.

"It surprises some people that we do not receive special funding from anywhere," said the group's communications director, Ferran Civit.

"The secret of our success is that people have switched from being spectators to being participants in the independence process.

During its relatively short existence so far, it has compiled a big database of activists who have signed up during its rallies, on whom it can call for mass demonstrations.

The ANC rallied tens of thousands of people in central Barcelona on Catalan national day, September 11, 2012, marking the start of the latest, hardest drive for independence.

"Right now we are the most mobilized and empowered society in Europe," said Civit.

"Our future is in our hands and on November 9 we will prove it. We are an organized people, a respected people — and soon we will be a free people."