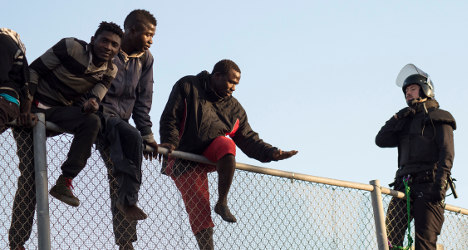 African migrants watched by a Spanish Civil Guard officer on top of the border fence in Melilla in October. Photo: Blasco Avellaneda/AFP

The Interior Ministry announced on Wednesday that it will create "centres of attention for asylum seekers" at border posts in the enclaves of Ceuta and Melilla, the two North African cities where there have been a series of violent incidents in recent months between security forces and migrants as the latter attempt to cross the high fences built to stop illegal immigration.

In an apparent softening of its anti-immigration stance, the conservative Popular Party government has decided to carry out this particular recommendation made by the UN’s Refugee Agency (UNHCR) just weeks after announcing that it planned to change Spanish law to allow for instant expulsions at the border, the eldiario.es news site reported. All opposition groups in Congress criticised the plan to insert a clause into the Citizen Security Law which would enable the security forces to escort immigrants who had scaled the triple fence complex back to Moroccan territory, defining such actions as “rejection at the border”.

Human rights organisations have distributed films of this practice taking place, in breach of current Spanish rules as well as international law. The video of one sub-Saharan migrant being beaten until he apparently fell unconscious before he was dragged to the Moroccan side of the fence at Melilla sparked criticism of Spain from the European Commission and the United Nations, among others.

The Interior Ministry said that the plan to build special asylum posts, to be put into action in the coming months, “will strengthen the system of international protection and meet more fully the requirements of the Common European Asylum System”.

Anyone reaching such an office and requesting asylum would then be housed at the respective enclave’s temporary immigrant shelter or be allowed to seek private accommodation in the territory. As well as sub-Saharan migrants, many Syrians and people of other nationalities fleeing turbulence and conflicts in the Middle East have attempted to enter Spain via Ceuta and Melilla.

Spain’s leading association in the defence of immigrants’ rights, the Refugees Assistance Commission (CEAR), gave the new measure a cautious welcome. Estrella Galán, CEAR president, said she was still concerned for the welfare of the thousands of sub-Saharan migrants who camp out in the forests beyond the border and who face harassment from Moroccan police.

"We are concerned that access to these [asylum] units is not guaranteed, particularly in the case of sub-Saharans, for whom it would be almost impossible to reach the border posts at Ceuta and Melilla. If the Moroccan Gendarmerie is going to prevent sub-Saharans’ arrivals, the solution will only be a relative one,” Galán said.

If the migrant’s asylum request were to be rejected, they would be returned to the country of origin, namely Morocco in this case. Last year Spain received 4,502 asylum requests, of which 22 percent were formally accepted for consideration. The proportion finally granted tends to be even lower.