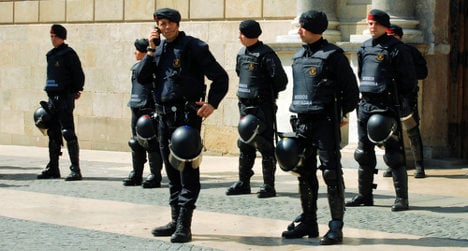 Catalan interior chief Ramón Espadaler, a leading member of the government led by breakaway president Artur Mas, has said that the region’s Mossos d'Esquadra police force would have to obey orders and prevent the vote on Catalonia’s independence from Spain, scheduled to take place on Sunday.

The newspaper El País quoted Espadaler as saying that such an order is a "remote hypothesis" before adding: "The Mossos will listen to what the judge and prosecutors tell them to do."

"There is no discretionary scope for a police force. If there is (an order), it will have to be obeyed and the Catalan Interior Department will do nothing to stop it," the official said, while expressing his wish that calm will be maintained.

The Mossos force, charged with public order in Catalonia, is set to roll out a special contingent across the region of 6,992 agents, some 5,000 more than would usually be on patrol on an ordinary day.

In addition, a further 400 federal riot police transferred to the region in October are still in Catalonia, Spain's Europa Press reported on Wednesday.

Spain's interior ministry denied these officers had been transferred because of the upcoming vote in Catalonia, saying they were being used to tackle itinerant crime and boost police presence near the French border.

The Supreme Court on Thursday rejected an appeal by the Catalan government against the Constitutional Court’s suspension of the vote on Sunday.

The latter court responded to a challenge against Mas’s watered-down consultation made by the Spanish government by declaring a suspension on the proceedings until it could rule on whether the vote was constitutional.

The Spanish government argues that Sunday’s vote is a referendum albeit in the guise of a participatory poll and says that only the state can call such polls. Mas has denied that his government is running the vote on Sunday, for which thousands of volunteers have registered to oversee proceedings.

The government of Prime Minister Mariano Rajoy has warned Catalonia that it must not use public resources in the staging of Sunday’s ballot, citing the Constitutional Court’s suspension of the proceedings.

"Efforts to use public resources to stage the consultation or other actions linked to it could go against the court ruling," the central government's representative in Catalonia wrote in a letter sent to the Catalan government according to a copy obtained by news agency AFP.

The letter was sent to the Catalan department that will organize the ballot as well as to the regional education department. Public schools are to be used as polling stations.

The central government representative also called on Mas to "avoid violating the decision" by the court.

Mas announced the symbolic vote after the Constitutional Court suspended earlier plans for a non-binding referendum on secession in September. Catalan officials argue the symbolic vote, which they call a "citizen participation process", is different from the official referendum because it has a less direct government role and is legal.

"We reiterate once again that the position of the government of Catalonia has always been to comply with the principle of legality," the Catalan government said in a statement in response to the letter from the central government representative.