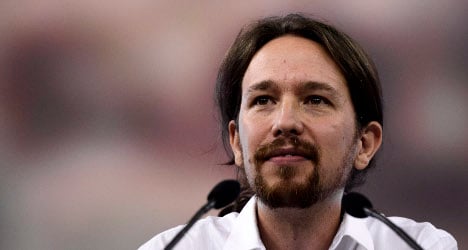 Why is it called Podemos?

Podemos means "We can" in Spanish and has clear echoes of Barack Obama’s slogan (Yes we can) during his successful US presidency bid. Podemos was also a motto adopted by a Spanish TV channel during the national football team’s glorious era of victories in the European Championships and World Cup.

While many of Podemos’s policies seem to have their origins in left-wing politics, such as the idea of a salary cap for high earners, the group’s leaders shy away from any such definition. Chief spokesman Pablo Iglesias has said he does not want the party to be perceived as from the left or right, but rather as one which can actually win power. In that sense, Iglesias has said he welcomes support from people who have previously voted for the conservative ruling Popular Party (PP) even though it is generally seen as a bigger threat to the Socialists and United Left.

Is Podemos a party and does it have a leader?

On its website Podemos defines itself as a “citizens’ initiative” which registered as a party for electoral purposes. Its candidates for the European elections were chosen in open primaries with an equal number of men and women on the list. In October registered supporters were able to vote on which policy documents Podemos should adopt. Currently one of Podemos’s five MEPs, Pablo Iglesias is officially the political spokesman, although he will run for secretary general in an online ballot later this year.

The Podemos leadership team gets the Star Wars treatment

What do they want?

Podemos wants to renegotiate Spain’s debt-paying commitments so that it can mitigate the impact of austerity policies on the population. Other eye-catching proposals are the idea of a fixed living allowance for all citizens in a bid to end dire poverty and reducing the retirement age to 60. A Podemos government would halt evictions of mortgage defaulters and recognize a Palestinian state. Underlining the entire platform is a proposed change in political culture, bringing transparency and participative democracy to all institutions.

Maybe they can… Since the party’s surprise result in May’s European elections in Spain, when Podemos burst out of obscurity to win almost eight percent of the vote, opinion polls have reflected a steady growth in support. In November’s survey by the government’s CIS research centre, Podemos came first in voter intention with 17.6 percent saying they would vote for the party "if general elections were held tomorrow".

In the CIS’s overall estimate of a general election result at this moment, Podemos came third on 22.5 percent, behind the PP and Socialists. Published by the newspaper El País on November 2nd, the latest poll by Metroscopia put Podemos ahead of the “big two”, in the lead on 27.7 percent.

Why is Podemos so popular?

Many observers describe Podemos as the party of the 15M “indignant” protest movement, and while its leaders do not entirely embrace that label, the group is helping to bring about the dismantling of the bipartisan dominance of the PP and Socialists that protestors began to clamour for in 2011.

The wave of corruption scandals has tarnished the image of the traditional parties at a time when Spanish governments of both left and right have been unable to prevent unemployment spiralling to unprecedented levels in the wake of the euro crisis.

The Bankia scandal, when Spain’s biggest savings bank had to be bailed out to the tune of €23.5 billion ($29.4 billion), under the stewardship of a former PP minister while tens of thousands were being evicted and many pensioners deprived of their savings, confirmed for many that there was a “caste” running Spain in its own interests, as Iglesias repeats endlessly.  Podemos has also been very effective in its use of social media networks and television.

Who is Pablo Iglesias?

The pony-tailed 36-year-old from Madrid is a university politics lecturer by trade, who has been catapulted onto the front line of Spanish politics after building up a cult following due to his appearances on TV debate shows.

He started out with his own shows La Tuerka and later Fort Apache (aired by the Iranian channel Hispan TV, now banned in Spain), but it was his appearances as an analyst on La Sexta Columna (on La Sexta) which brought Iglesias to a wider public.

Rarely ruffled, Iglesias is able to string together leftist critiques of current politics in an articulate and highly fluent manner. Due to this personality cult, Iglesias complains that he can no longer go out for a quiet drink in the alternative Malasaña area of the capital and is reported to be discussing security arrangements with Spain’s Interior Ministry.

Who is afraid of Podemos?

The party’s vertiginous rise in opinion polls is putting the wind up plenty of Spain’s power centres. Responding to the party’s strong showing in the polls, business leaders such as the president of cava producer Freixenet, voiced their concern. “I won’t even consider the prospect of them winning,” José Luis Bonet said.

The leaders of the major parties have had little to say about the party now outpolling them, so little in fact that Iglesias has expressed his surprise that no one in government has made any approach to him to discuss the political scenario. For the ruling PP, Madrid leader Esperanza Aguirre has taken on the role of combatant, publicly accusing Podemos of supporting ETA, the Castro government in Cuba and the Bolivarian socialism of Hugo Chávez.

How has Podemos risen to prominence?

Podemos was launched in January and registered as a party on March 11, 2014. Its return of five MEPs from May’s European elections was a shock to the political sphere, and widely attributed to the organisation’s savvy use of social networks such as Twitter and Facebook.

"It's not just the apples, the whole tree is rotten. And they are all going to fall," tweeted Podemos about Spain's corruption scandals.

Since then, chief spokesman Pablo Iglesias has appeared on increasingly mainstream television shows, where his earnest claim that Podemos has been formed in order to win power has begun to sink into the collective consciousness as a real possibility. The group has decided not to field candidates under the Podemos name in next May’s nationwide local elections in order to focus in a disciplined and united manner on the general election, scheduled for November 2015.

How is Podemos financed?

The party makes a point of being transparent about its finances, updating periodically a page on its website detailing income and expenses. As of the time of writing, the page states that between January and August Podemos spent €331,564 in total, breaking down the amounts used for events, publicity, salaries and so on. Income from the same period was €504,811, mostly from donations and crowdfunding.

Some political enemies have tried to get mileage out of media reports stating that Iglesias and other Podemos leaders worked for a foundation which provided political consultancy services to the Venezuelan government when it was led by Hugo Chávez. On a recent visit to South America, Iglesias explained that it was no longer politically expedient for him to visit Venezuela, but he met with other leftist presidents such as Ecuador’s Rafael Correa and Uruguayan José Mujica.

According to a breakdown of the information in the government-funded CIS research group’s most recent poll, Podemos is drawing support from a wide spectrum of sectors in society, with the urban young and professional classes providing its strongest concentrations of potential voters. The strongest age group for Podemos of those presented by the CIS research carried out in October is the 25-34 age range, where the party easily defeats its main rivals in the PP and Socialists with 27.2-percent backing. Moving up the age scale, however, Podemos’s support begins to tail off, with only 5.7 percent of over 65s saying they would vote for the new party.

Podemos gets a similarly low score in municipalities with fewer than 2,000 inhabitants, in other words, rural villages, where only 7.3 percent support the group. In Spain’s biggest cities with over one million inhabitants, Podemos comes first on 23.6 percent.   Finally, in the breakdown of the results by social class, Podemos gets highest support from middle and upper-middle-class professionals, scoring 23.2 percent, double the backing received by the PP and Socialists. The PP relies most heavily on businesspeople and farmers, of whom over 25 percent support the conservatives, while the Socialists still get 27.5-percent backing from unskilled workers.