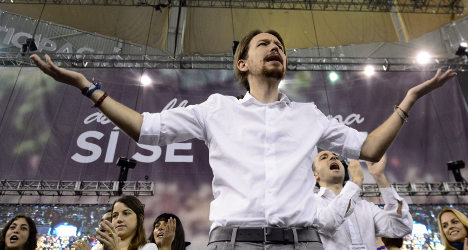 The latest edition of the monthly poll run by the Spanish government's CIS research centre has 17.6 percent of people surveyed saying they would vote for the new Podemos party "if general elections were held tomorrow".

That figure is 5.9 percentage points ahead of the Popular Party (11.7 percent) and 3.3 percent ahead of the country's major opposition party, the Socialists (14.3 percent).

However, the CIS poll also predicts Podemos, led by charismatic political science professor Pablo Iglesias, would still come third in general elections. By their estimates, the Popular Party would pick up 27.5 percent of the vote in general elections, while the Socialists would claim 23.9 percent and Podemos 22.5 percent.

To come up with this estimate, the CIS looks at the results from the answer to the question on voter intentions above.

Based on those responses, researchers then extrapolate as to how the around 20 percent of people who answered to that question by saying they were yet to decide — or who simply did not respond — would vote.

However, El País newspaper pointed out that it was particularly difficult to predict voter intention in the latest CIS poll as Podemos is a new party and has, to date, only stood in European Union elections.

Nonetheless, the CIS results on voter intention are in line with a recent poll run by El País in which 27.7 percent of people said they would vote for Podemos, seven points clear of the government.

They are also part of a damning portrait of Spaniard's views of their politicians. A total of 49.5 percent of survey respondents said the political situation was "very bad" while 39.3 percent said this situation was worse than a year earlier.

Podemos came to prominence in May when it picked up five seats in EU elections. Less than a year old, the party seriously threatens the stranglehold on power enjoyed by Spain's scandal-hit two major parties.