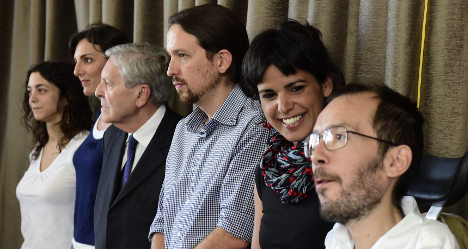 Podemos, which means "We Can" in Spanish, took first place in a survey of voting intentions for the first time on Sunday.

The poll published in centre-left daily newspaper El Pais gave it 27.7 percent support, just ahead of the Socialists with 26.2 percent. The ruling conservative Popular Party (PP) was third with 20.7 percent.

The newspaper, which on Wednesday described the party as a "monster with one hundred heads" called it a "political earthquake".

"Never before has a new party achieved such a level of voting intention," it said.

As well as promising to end corruption, it calls for a 35-hour work week, public control over "strategic" sectors of the economy and the lowering the retirement age to 60 to redistribute job opportunities, a platform voted for recently by party members.

Another survey — by state pollster CIS — estimated Podemos would come a close third in general elections with 22.5 percent, just behind the Socialists at 23.9 percent and PP on 27.5 percent, with the results based on adjustment of raw data in line with historical voting trends — a difficult exercise given Podemos's short history.

Analysts said the party had plugged into mounting discontent with Spain's two big establishment parties which have dominated politics since the country returned to democracy following the death of longtime dictator General Francisco Franco in 1975.

Its rapid rise is "a shock", said Anton Losada, a political scientist at Santiago de Compostela University, adding that Podemos was draining support from voters on both the left and right.

"It is fuelled by a growing dissatisfaction with traditional parties and a lack of response from them to the problems that worry Spaniards the most: the economic crisis and corruption."

Podemos parallels the rise of anti-establishment parties elsewhere in Europe, such as Italy's 5-star Movement, Greece's Syriza and Britain's UKIP.

It fielded young candidates who are new to politics and relied heavily on social media.

"I will probably vote for them in the next elections," said Marina Todelo, a 30-year-old Madrid veterinary who voted for another left-wing party in the European elections.

"Now I have the impression that they could win. I am convinced by what they say. We need to change things."

The party is structured around "círculos" — groups of people defined by a shared location, job or special interest.

The enthusiasm of its supporters is a major asset.

"What a change! We have gone from being people who were bored by elections to those who are dying for them to arrive," said Pablo Soto, a 34-year-old IT specialist who has active in the party from the start.

"Suddenly people are putting their hope in politics," added Soto who took part in the "Indignados" movement.

Iglesias, the 36-year-old leader of Podemos, is a frequent guest on television talk shows where he lambasts "the caste" — Spain's political and economic elites who he blames for Spain's economic crisis.

"We are there to win," he said during a keynote speech last month at the party's "citizens assembly" at Madrid's Vistalegre bullring.

With Spain struggling with an unemployment rate of 23.7 percent, one of the highest in the industrialized world, the party's policies are welcomed by many struggling Spaniards.

But among business circles the proposals raise alarm bells.

"The economic recipe of Pablo Iglesia's party…would lead to an abysmal increase in public spending that would frighten investors and block access to international markets," business daily Expansion wrote on Tuesday.

Facing a possible election victory next year, Podemos now faces the difficult balancing act of retaining its revolutionary zeal while also appearing like a credible party of government.

Iglesias told La Sexta television on Sunday that while he is not "moderate", the party needed to be "very serious and cautious".

"It is one thing to present oneself for the first time to elections, another to prepare to possibly form a government in a year," he said.

The party has softened its stance in recent weeks on some issues. Party leaders now talk of an orderly debt restructuring process — deciding what part of that debit is illegitimate —  instead of defaulting on Spain's debt.

"Podemos is a party under construction. It must now face the challenge of building on the expectations in a way that those who have bet on it do not feel betrayed," said Losada.