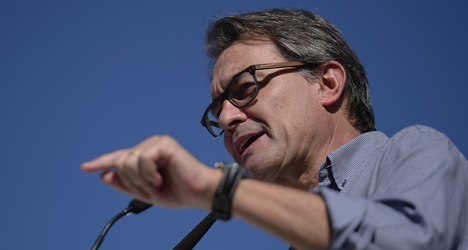 Catalan newspapers reported Mas's rousing speech at a Forum Europe breakfast conference in which he made his case to defend the "fundamental right to decide".

Mas has vowed to press ahead with a non-binding vote on Catalan independence on November 9th despite opposition from the Spanish government and Constitutional Court.

He quoted Winston Churchill, saying, "It is not enough that we do our best; sometimes we must do what is required."

"I call on the Catalan people to not be afraid," said Mas. "We are doing what we have to do and we are doing it in the legitimate defence of everyone. The right to participate, to have freedom of choice and of expression, unites us. I call on everyone to participate  on November 9th and defend your personal choice, knowing that by defending it, you defend whole country regardless of your political beliefs.”

Mas slammed the Spanish state, describing it as having "ideas from the 20th or 19th centuries".

"The Spanish state defends itself and Catalonia defends the people," he said. "We are taking the Spanish government to court because it is damaging the fundamental rights of Catalan citizens to free political expression and free speech.  The Spanish Government has a lot of power and when one has such power, one must use it proportionally.  They are using it abusively, therefore, we are defending ourselves this way."

"We tried to negotiate; they didn't listen. A fiscal pact, elections, a petition from the Catalan parliament to authorize a referendum… Of the 23 proposals presented to the Spanish president, I received only one half of one reply," he added.

"Keep calm," he said. "For three years in a row there have been immense, unprecedented social mobilizations. When you talk about a million people, you must remember we are a country of 7 million, not like France or the UK. This process has been being carried out without a single blow, insult, or even a piece of litter. It’s been a lesson in citizenship. This week, it’s more important than ever, that it stay that way."

"The biggest mistake we could make would be to lose that calmness and serenity,” he said. "Lots of calmness and nerves of steel. We won’t move from that; it’s one of our biggest assets. Everything is focused on November 9th. It's Catalonia’s D-Day: D for 'Democracy'.”

Mas added: "This week, they’ll try to introduce fear and confusion in Catalonia".

"I have a message for the 40,000 volunteers who have signed up:  You have every right to volunteer. They can’t stop you, ” he said.

Mas also reached out to the international community during his speech, opining that "the basic shared project today is the European one."

Asked if an independent Catalonia would be truly viable, he answered, "Is Lithuania viable? Estonia? Latvia? They’re much smaller than Catalonia and they have neither its gross domestic product nor its population. Is Denmark viable, with the same population?”

He said that on Monday he planned to again contact the Spanish PM to try to reach an agreement.

"On Monday I'll write a letter to him to assess what has happened. I'll remind him that there's still the option of holding a British or Canadian-style referendum."

Sunday's vote, which Mas insisted is not a "referendum", will be organised by volunteers without an official electoral roll, but holding it in defiance of the court's veto would put Mas on delicate ground.

"If they go ahead, it will be civil disobedience — not for the people who vote but for the public officials involved. That is a penal offence," said Yolanda Gomez, a constitutional law expert at Spain's distance-learning university UNED.

Mas had promised to hold the vote in a legal form and watered down plans for an official referendum-style ballot after earlier legal challenges from the conservative government.

Now he has been forced into defying the law in order to keep his promise of holding the vote.

"This time, Mas is going to openly disobey. It is a very complex and delicate matter," said Eduardo Virgala, a constitutional law specialist at the University of the Basque Country.