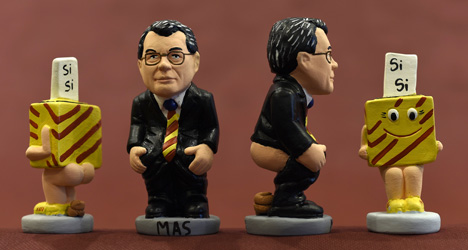 Other gestures of support for a vote on independence in Catalonia include the creation of traditional 'caganer' figures featuring the region's president, Artur Mas, and ballot boxes. Photo: Lluis Gene

The Catalan capital was literally rattled at 10pm on Tuesday night as people took to their balconies to demonstrate against the decision of Spain's Constitutional Court to outlaw a poll due to be held on November 9th.

A cacophonous din echoed through the city for over ten minutes as Catalans banged pans and lids in a type of noisy protest known as a 'cassolada'.

The first major cassolada took place in 2003 as a protest against Spain's involvement in the US-led invasion of Iraq. Other notable cassoladas took place around May 11th 2011, the time of the indignados anti-austerity protests across Spain which eventually led to the emergence of the Podemos party as a major political force.

Tuesday's protest was organized through social media with the Twitter hashtag #cassolada but the majority of participants joined in when they heard the protest begin and start to build to a crescendo.

Not everyone was happy with the noise, which woke some sleeping children and caused dogs across the city to howl, but many families took to their terraces together and linked up with neighbours to demonstrate their feelings.

Check out the videos below of Barcelona's cassolada protest:

The independence vote controversy has influenced another Catalan tradition, that of the ceramic figurines called 'caganers' (shitters) which date back to the 18th century. Statuettes of well-known people with their trousers down are traditionally hidden in Christmas Nativity scenes and invite friends to find them.

Popular caganers on sale this year include Catalan president Artur Mas squatting next to ballot boxes representing the vote for independence.