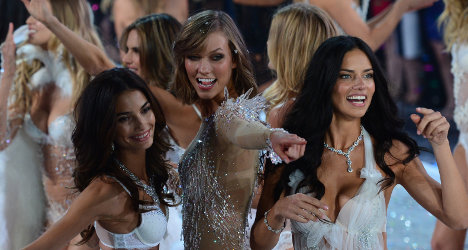 Models perform at the end of the 2013 Victoria's Secret Fashion Show at the Lexington Avenue Armory in November 2013 in New York. Photo: Emmanuel Dunand/AFP

Padilla's appearance in the December 2nd show in London will be the fourth by a Spanish model in an event which helps sell millions of dollars worth of lingerie for US firm Victoria's Secret.

It will also see the 19-year-old lined up with top models including Adriana Lima and Alessandra Ambrosio who will both wear the label's so-called Fantasy Bras valued at $2 million for the fashion show.

"I have no words to describe how happy and excited I am, I feel so honored to be part of such an incredible project. Thank you supporters and everyone who believed in me!!" said Padilla, announcing the news on her Instagram site.

Thank u for such amazing photos @seb_sabalbruce

Padilla's appearance at the Victoria's Secret show is the latest chapter in a staggering year for the young model. Less than a year ago, she was discovered by modelling talent scout Ignacio Aysa while she was changing trains at Madrid's Plaza de España metro station.

She then went on to win the L’Oréal prize for the best model at Madrid Fashion Week in February. She has also participated in fashion weeks in New York, Milan and Paris for designers including Dolce & Gabbana, Spanish daily La Vanguardia reported.