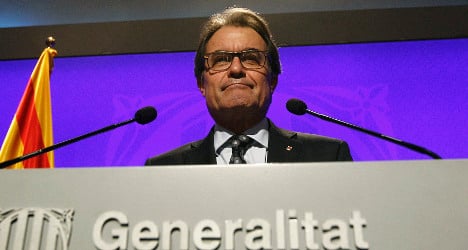 The Barcelona-based administration will also launch a lawsuit against Spain's central government for "curbing freedom of expression" by seeking to stop the vote through the Constitutional Court, Catalan government spokesman Francesc Homs said.

His words came after Spain's Constitutional Court has voted unanimously on Wednesday to block Catalonia's public poll on independence from Spain, just a month after banning the region's original plans for a consultation.

The court of Spain has upheld a motion presented on Friday by the country's Popular Party government to prohibit an amended poll on Catalan independence due to be held on November 9th.

After the Constitutional Court formally suspended the initial referendum following a government appeal, Catalonia's regional president, Artur Mas, announced that his plans for an official consultation could not be carried out, but he said a less formal poll could still take place.

Volunteers had registered to oversee the ballot for which there was to be no official census, with each voter proving eligibility and their name being entered into a database to prevent multiple voting.

Voters were to be asked if they thought Catalonia should be a state and, if so, whether it should be independent.

Prime Minister Mariano Rajoy’s cabinet had asked the State Council consultative body if it thought there were grounds for a legal appeal against the new Catalan consultation. The answer came back that the vote was even less legitimate than the former plan as it lacked basic democratic "guarantees".

The court has upheld Rajoy's complaint and ruled that the poll can not legally take place but it has not responded to requests to include a clear warning to Mas of the consequences of defying the ban.

Twelve judges needed only a brief meeting on Wednesday morning to reach their conclusion.  The ruling backdates to October 31st and the judges have suspended the website through which the new poll was to be organized, according to Catalan daily El Periodico.

Mas has said the plan for a symbolic referendum is legal and has called on Catalans to vote on November 9 and "give a great lesson in democracy and civility".

But according to a poll published last week in top-selling daily newspaper El País, 49 percent of Catalans are against the watered-down referendum and 44 percent in favour.