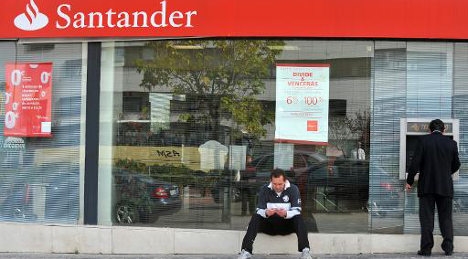 The bank said cost reductions were greater than expected. Photo: Philippe Desmazes/AFP
Net profit increased to €1.601 billion ($2.0 billion), up from €1.06 billion in the same period last year, the bank said in a statement.
During the first nine months of the year net profit rose 31.7 percent to €4.36 billions even as net operating income inched down 0.3 percent to €16.75 billion.
"The group's three core markets — Spain, Britain and Brazil — all posted profit growth in the January-September period, something that had not happened since 2009," the statement said.
The bank said cost reductions were greater than expected. Santander had planned to reduce costs by €750 million in all of 2014 but by the end of September it had already met this goal.
It said it has now revised its goal and is forecasting costs to fall by €1 billion in 2014.
"Profit growth in 2014 helped consolidate the earnings recovery, thanks to improving revenues, falling costs and less need for write-downs," Ana Botin, who became Santander chairman in September after the death of her father Emilio Botin, said in a statement.
The group also said its ratio of high-risk loans — mostly left over from a 2008 real estate crash — fell in the third quarter in a row to 5.28 percent.