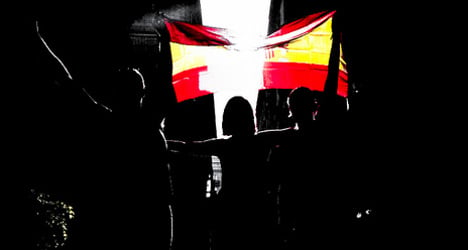 No arrests were made during the meeting, but police took the details of 28 members of the fascist groups. Photo: Al King/Flickr

The event which gave pro-independence groups a chance to explain why they favour an independent Catalan was interrupted when members of Spain's right-wing Falange and National Alliance groups waved fascist flags and shouted "Viva España" and "Don't cheat us, Catalonia is Spain".

A plainclothes policeman warned the group to leave, although after they did so, they reentered the conference room at Madrid's venerable Ateneo cultural centre, shouting slogans. When police back up arrived, the activists protested they weren't doing "anything wrong". Scuffles with police and attendees at the events ensued.

No arrests were made, but police took the details of 28 members of the fascist groups, Spain's La Vanguardia reported.

The incident came the evening before a Spain's Constitutional Court sits down on Tuesday to examine if they will take on a Spanish government appeal against a symbolic November 9th vote on the issue of independence for Catalonia.

The Catalan government drew up plans for the watered down, non-official vote after Spain's central government in Madrid appealed for the Constitutional Court to rule that original plans for a unilateral non-binding referendum were unconstitutional.

On Friday, Spain's central government stepped up its war on the vote, launching a fresh judicial challenge against the new form of the referendum by petitioning the constitutional court to block this vote as well.

Deputy Prime Minister Soraya Saenz de Santamaria has said the Catalan plan for the symbolic referendum, with volunteer poll watchers and same-day voter registration, represents a "legal fraud" and "a perversion" of democracy.

The Catalan government said on Monday it had petitioned Spain's constitutional court to allow it to go ahead with this weekend's symbolic vote on independence despite opposition from Madrid.

"We have presented this petition to prevent the constitutional court from suspending" Sunday's referendum, the spokesman for the Catalan government, Francesc Homs, told a news conference.

However, the court is widely expected to grant the government's request for an injunction.

If that does happen, the Catalan government has suggested it could hand over the running of the vote to civil groups including the Catalan National Assembly.

Proud of their distinct language and culture, Catalonia's 7.5 million inhabitants have been demanding greater autonomy over recent years. The region accounts for nearly a fifth of Spain's economic output.