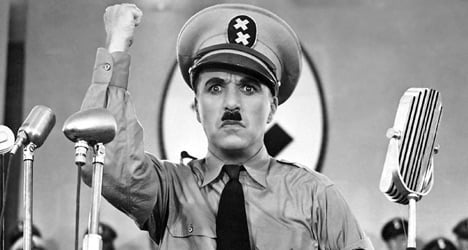 Hitler? The politician denied that his Swastika-free costume represented the Nazi leader but claimed that he had "the right to dress however he liked" at a private party. Photo: Wiki Commons/Crisco42

The local councillor for Agriculture and Fisheries in Gandia, in Spain's autonomous Valencia region, surprised guests at the annual Halloween fancy-dress party thrown by the town's mayor by turning up dressed in faux-military uniform and sporting a distinctive 'toothbrush' moustache and comb-over haircut.

Rodríguez, like the town's mayor Arturo Torro, is a member of Spain's ruling right-wing Popular Party (PP) which is under pressure in opinion polls after a series of scandals.

He was photographed in costume next to another PP councillor, Pilar Gavilá at the horror-themed event held in a huge marquee.

Apparently unaware of the implications of his chosen attire, he then uploaded the photo on Saturday to social media where it quickly attracted negative attention according to local newspaper Gente de la Safor.

In light of its unfavourable reception, he then took it down several hours later but by then it had been widely circulated.

Arturo Torro moved to quieten any criticism of his colleague by telling reporters that Rodríguez "did not intend to glorify the character but to ridicule him and show him as a character of horror".

Rodríguez himself, however, showed little regret for his choice. He denied that the Swastika-free costume represented Adolf Hitler and reportedly said, "It was a private party and I could have gone dressed however I liked, just like if I'd gone dressed as Lola Flores" [a deceased Spanish singer and actress].

It is not the first time that Gandia's Popular Party has hit the headlines for Nazi-related gaffes. Last year, the then-Secretary General of the party's youth wing, Daniel Terrades, was photographed performing a fascist salute in front of a Francoist monument.

The Popular Party opened an enquiry into this and a number of similar offences last Autumn. It declared that it would take action against members who displayed fascist symbols or performed Nazi salutes but it has not yet meted out any punishments.