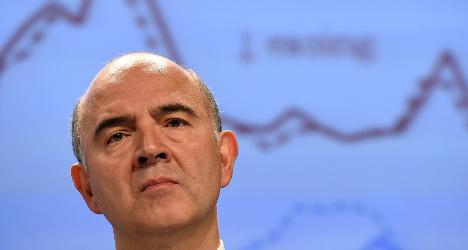 European Commissioner for Economic and Financial Affairs Pierre Moscovici at the EC headquarters in Brussels on Tuesday. Photo: Emmanuel Dunand/AFP

Spain saw its growth predictions trimmed as the European Commission warned of weak economic growth for the rest of 2014 in both the EU and the eurozone in its 2014 Autumn Economic forecast.

The country will now only grow by 1.2 percent in 2014, against the 1.3 percent rise forecast by the Spanish government.

Growth in 2015 will also be lower than originally forecast: Brussels now says this will be 1.7 percent in 2015, against the 2-percent figure touted by Madrid, and down three decimal points on earlier Commission forecasts.

However, the new European Commission growth forecast for Spain is higher than that for Germany — expected to see growth of 1.1 percent in 2015, France (0.7 percent) and Italy, where growth is expected to be 0.6 percent.

It is also higher than the 1.1 percent forecast set for the eurozone as a whole.

"Although a modest  deceleration is expected (for Spain) for the second half of the  year, the recovery is foreseen to regain momentum  thereafter amidst improved confidence, a loosening  of financing conditions and better labour market  prospects," said the Commission in its autumn report.
On the unemployment front, the news is less glowing. Spain is expected to see a jobless rate of at least 22.2 percent until the end of 2016 — higher than the 22 percent forecast for Greece at the same point in time.
"Positive trends in employment are expected to intensify over the forecast horizon, helped by continued wage moderation and only modest increases in nominal unit labour costs," said the Commission.
They sounded a note of caution, however, noting "negligible" risks because of possible slower-than-expected growth in the eurozone.
The Commission also noted Spain was unlikely to hit its public deficit target of 5.5 percent this year, with this figure expected to come down to 5.6 percent by the end of December.
That remains, however, a long way down from the 6.8 percent public deficit level at the close of 2013.
Spain's public deficit figure is forecast to come down to 3.9 percent by the end of 2016.
Public debt will also remain high, continuing to climb to 102.1 percent of GDP by that same date.