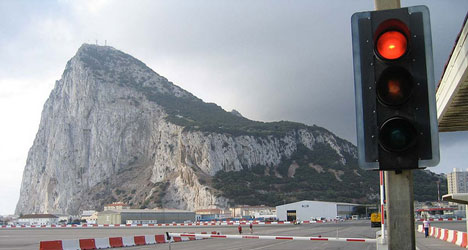 Gibraltar air controllers claim that they were forced to order the BA plane to change direction some 10-15 miles from the runway. Photo: Nick Herber/Flickr

The Spanish military surveillance jet was flying ahead of the BA plane when it "suddenly reversed its direction and took another course", prompting air controllers to order the British flight to change direction so as to maintain a safe distance.

The incident happened on Friday when the BA flight was just about 10 to 15 miles from landing, Gibraltar authorities said.

"The Government of Gibraltar is waiting for a full report on the incident, which will clarify whether the Spanish military plane made an incursion into the airspace over British Gibraltar territorial waters," the statement added.

Spain ceded Gibraltar to Britain in perpetuity in 1713 but has long argued that it should be returned to Spanish sovereignty, and the small territory remains a regular source of diplomatic tension between the two countries.

Spain severed air links with Gibraltar in 1954 following a visit by Queen Elizabeth II, which Madrid, then under military dictator General Francisco Franco, regarded as provocative. Air links between Spain and Gibraltar resumed in 2006.

Spain closed the road border in 1969, reopening it only in 1985, a decade after the dictator's death and one year before European Union accession.