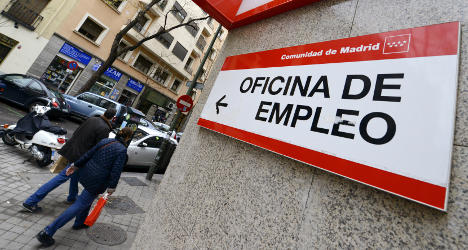 When seasonally adjusted the number of people seeking work in October in Spain was down 19,393, the labour ministry said. Photo: Gerard Julien/AFP

A total of 79,154 people joined the unemployment line in Spain bringing the total number of people registered as looking for work to 4,526,804 according to Spain's employment ministry.

When seasonally adjusted, however, the number of people seeking work in October was down 19,393, the biggest October drop in 16 years, the ministry said in a statement. The average October increase in the last six years has been 118,000.

In addition, some 174,534 left Spain's unemployment queues in the first ten months of the year, the largest fall since 1998.

October also saw the signing of 1,702,152 new contracts, or 7.6 percent more than the same month a year ago. However, only 8.7 percent of these contracts were for ongoing positions, with rest being temporary employment.

The figures come in the context of continued growth in Spain with preliminary estimates showing Spain's economy grow 0.5 percent in the third quarter of 2014, as the country claws its way out of a long economic crisis.

Spain's current unemployment rate remains at 23.67 percent, one of the highest in the industrialized world. This figure — different from the monthly figures provided by Spain's Labour Ministry — is based on a quarterly survey of 65,000 households across the country, or the EPA.

A recent report by Spanish charity Caritas showed one in four Spaniards are living in poverty.