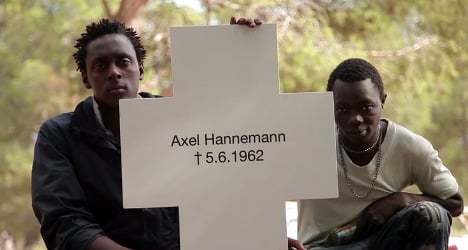 The seven white crosses, on the bank of the Spree river by the German parliament, were removed by activists and brought to the EU-African border at the Spanish enclave of Melilla to signify the "new walls" in Europe.

"While the whole of Germany is preparing to commemorate the fall of the Berlin Wall 25 years ago, there are new walls around Europe, where at least 30,000 people have capsized," the group wrote on its website on Monday.

The group calls itself the Centre for Political Beauty (Zentrum für politische Schönheit) and posted pictures on its website of African refugees holding the memorials.

In a video on YouTube showing the removal, the group described their move as an "act of spontaneous solidarity".

Police said they noticed the crosses were missing at 8.30am on Monday.

"Officers initiated an investigation into the theft" police said in a statement. "Due to a publication on the Internet, in which the alleged offenders admit responsibility for the action, as well as the obvious political motivation the police's state protection wing has taken over the investigation."

The situation on the border between Morocco and the Spanish enclave of Melilla has been particularly tense in recent times, with the EU on Friday demanding answers after footage filmed by a rights group on October 15th showed Spanish Civil Guards beating a migrant and carrying him, apparently unconscious, back to the Moroccan side, despite the fact that migrants reaching Spanish soil are meant to get asylum.

Amnesty International and 12 other human rights groups on Thursday had urged the United Nations and Europe to press Spain to stop the "illegal" deportations of migrants who reach Melilla and Ceuta, its territories in north Africa.

Spain's conservative government has said it will pass a legal amendment authorizing police to expel migrants who climb over the fences to the two Spanish-governed territories which have Europe's only land borders with Africa.

Spanish authorities say thousands of Africans have tried to climb over the seven-metre (23-foot) high fences into Melilla and Ceuta this year, with numerous migrants and police officers injured.