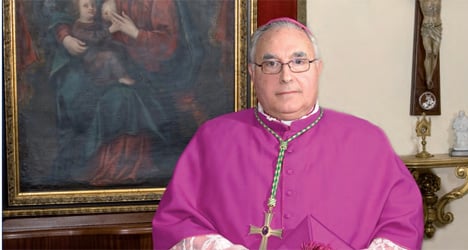 The clerics speculated that archbishop García Aracil, who is due to retire next year, could be preparing the residence for his personal use. Photo: Archdiocese of Mérida-Badajoz

Santiago García Aracil, archbishop of the Extremadura diocese of Mérida-Badajoz in the west of Spain since 2004, has been accused of having high-spending habits which do not fit "the criteria of pastoral austerity and common sense".

According to Spanish daily El Mundo, fifty priests have written to the Pope's representative in Spain, Renzo Fratini, to inform him of what they consider to be the inappropriate spending sprees of the archbishop of bling'.

García Aracil is said to have ordered a €1.54 ($1.92 million) million refurbishment of the district's seminary plus a complete remodelling of the third floor of the bishop's palace. The eventual price of the palace rebuild is still unknown but priests estimate it to be at least as high as that of the seminary. The palace's new fittings are said to include "huge" walk-in wardrobes, luxury furniture, marble floors, a library, a spa and a Jacuzzi.

The priests speculated that García Aracil could be planning to use the floor as his personal residence when he retires next year. At present, he lives in the official archbishop's residence, a 500-square metre (5,400-square foot) flat but he could be required to move out when his replacement is named.

In the letter the priests ask the Pope's representative to intervene to prevent the "poor" church in the region from being saddled with bills for the rebuild in order to ensure that the arrival of the new archbishop "is not influenced by uncomfortable situations".

They point out that Extremadura is one of the least-developed regions in Spain, with an unemployment rate of almost 30 per cent, rising to 64 per cent among young people.

Last year, the Vatican indefinitely suspended a German bishop who embarked on a series of ostentatious building projects totalling €31 million in the historic town of Limburg an der Lahn.