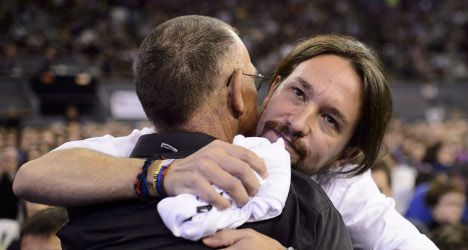 Podemos, which grew out of Spain's 'indignant' movement would receive 27.7 percent of the vote if general elections were held in Spain tomorrow, according to the poll published by Spain's left-leaning El Pais newspaper on Sunday.

That puts the party which stormed to prominence after winning five seats in the European Elections in May a clear seven percentage points ahead of the Spain's ruling Popular Party which would receive 20.7 percent of votes.

The result also puts Podemos, which means "We can" in Spanish, ahead of the opposition socialists who would win 26.2 percent of the vote.

The results are also a sign of the frustration felt by Spanish people as Spain's two largest parties struggle to deal with two new corruption scandals.

Recently, Spanish Prime Minister Mariano Rajoy apologized in the wake of raids which saw police make 37 arrests as part of an investigation into a kickbacks scheme in which politicians and public officials from both major parties allegedly received illegal commissions from companies in return for political favours including the awarding of contracts for construction and infrastructure projects.

Those revelations followed hot on the heels of another scandal which saw top banks executives at two major Spanish banks allegedly using secret credit cards to make private, undeclared purchases. Among those named in the investigation are former IMF chief and Popular Party member Rodrigo Rato.

The new El Pais poll shows the Popular Party has been particularly hard hit by these scandals, with 20 percent of its voters saying they would abstain in Spanish general elections expected to be held in 2015.

The message from Podemos was one of caution with Íñigo Errejón calling for party members to keep "a cool head" and keep an eye on the long game.

"We are at the turning point of two eras," Errejón tweeted, a reference to the end of a two-party system which has dominated Spanish politics since the country's return to democracy after the death of the dictator Francisco Franco in 1975.

Podemos members recently participated in a poll on the future direction of the party, electing not to participate in municipal elections in Spain in May 2015 and instead setting stall to be possible election winners in upcoming general elections.