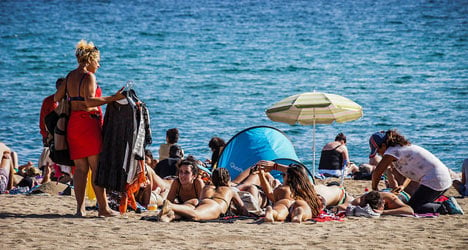 The Fabra astronomical observatory of Barcelona's Royal Academy of Science and Art sits on the south face of Tibidabo mountain, looking out over the city.

Despite its lofty location, its meteorological station recorded an average temperature in October 2014 of 19.6ºC, 3.7ºC higher than the 1914–2014 October average.

According to Catalan daily La Vanguardia, the temperature beat the previous highest average, recorded in 2013, by 0.1ºC.

"The weather for the month has been basically consistent apart from a brief thunderstorm on the 5th. Mild temperatures have remained very stable with no cold snaps," he wrote in the observatory's monthly bulletin.

Tourists and locals took advantage of the unexpected Indian summer and flocked to Barcelona's beaches while scientists analyzed the causes of the warm weather.

Data from the Catalan Meteorological Service indicated that the month of October 2014 had been characterized by "thermal values ​​significantly above normal and low rainfall due to weather dominated by low pressure  regions from the Atlantic during the first half of the month and the presence of high pressures in the second half."

A "very warm tropical front" was said to have blown across the region from the south during the second half of the month.

The weather service confirmed the Fabra Observatory's findings and said that temperature recorded along the Barcelona coast and surrounding areas were "the highest in at least 60 years."

Spain is now expecting a cooler week as cold fronts bring rain and even snow to altitudes above 1,200 metres (3,900 feet), according to the country's meteorological agency Aemet.