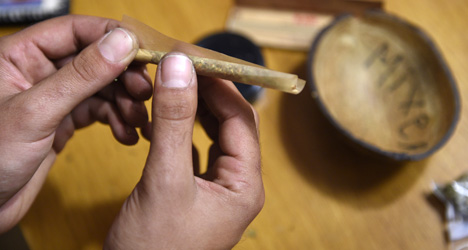 The regulations, aimed at curbing Barcelona's reputation as a 'pothead's paradise' for tourists, will ban clubs from supplying new members for at least 15 days. Photo: Lluis Gene/AFP

The new rules are the result of months of discussions between health officials, parliamentary groups and representatives of the clubs after 49 were closed down by police in August.

The Catalonia Federation of Cannabis Associations had called for clearer regulations in order to help control bad practices.

Catalonia's 300 clubs will now be required to possess the relevant municipal licence and will not be allowed to supply cannabis to new members for a period of at least 15 days.

Authorities want to clamp down on the cannabis tourism that has given Barcelona a reputation as a 'pothead's paradise'.

To that end, they will ban posters encouraging the use of cannabis and instead insist on information panels that explain the associated health risks, according to Spanish daily Publico.

The original draft included regulations proposed by the clubs regarding the growth and transport of marijuana but a number of differences of opinion between cannabis associations and officials could not be resolved, resulting in the health-based regulations due to be passed on Thursday.

Dealing in cannabis is illegal in Spain but the law does not prohibit growing it for private consumption. It also allows the existence of smokers' associations or cannabis clubs.

Club members pay an annual subscription fee plus a variable fee to cover the cost of producing the cannabis they consume.

A cannabis club is legal as long as it controls consumption and refrains from advertising and distributing the drug for profit.

Smokers' groups say some 700 such associations have sprung up in Spain due to a legal loophole.

Some clubs are suspected of stepping over the line, however, venturing beyond their non-profit association activities into full-blown drug-dealing.

Half of Spain's cannabis clubs are in Barcelona, which tops the rankings on WeBeHigh, a travel advice website for soft drug users, beating Amsterdam.