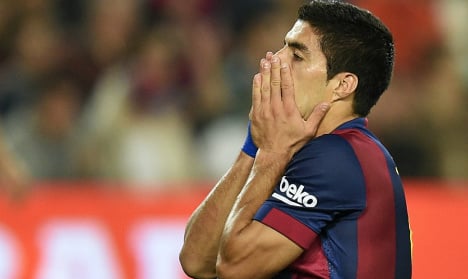 Real Madrid took advantage of Barcelona's slip up to move top of the table as they continued their free-scoring form with a 4-0 thrashing of Granada earlier on Saturday and champions Atletico Madrid are up to second as they eased past Cordoba 4-2 at home.

Just as in his debut defeat against Real at the Bernabeu last weekend, Suarez was left frustrated as Barca hit the woodwork four times and were denied on several more occasions by fine saves from Celta goalkeeper Sergio Alvarez.

"To make my debut in the Camp Nou in a competitive game was nice but the result is negative again," Suarez told Barca TV.

"We created a lot of chances, but we didn't have luck on our side. They defended well and their goalkeeper was great.

"Football can be unjust at times, the opponent creates one chance in the whole game and scores and that hurts."

Neymar smashed an early dipping shot off the crossbar, but Celta were enjoying plenty of the ball and could easily have gone in front if they hadn't been so wasteful with the final ball.

Barca began to get going midway through the first-half and only a stunning save from Alvarez prevented Lionel Messi equalling the record as La Liga's all-time leading scorer as his first time hit from Neymar's cut-back was turned behind.

Even when Messi did beat the Celta 'keeper moments later he was denied as Jonny made an incredible sliding clearance with a touch of fortune as the ball ricocheted to safety off his own crossbar.

Messi headed over when unmarked from an enticing Suarez cross and Alvarez made another pair of great saves to deny Suarez and Neymar before the break.

Neymar somehow turned Jordi Alba's cut-back onto the bar once more with the goal at his mercy and Barca were finally hit by a clinical Celta breakaway on 55 minutes as Nolito's brilliant backheel was swept home first time by Larrivey.

Barca boss Luis Enrique introduced Xavi and Pedro in an attempt to turn the game around and from the latter's cross Suarez had a golden opportunity to open his account for the club when he headed straight into the arms of Alvarez.

Celta had a glorious chance to seal the three points when Charles headed over an unguarded goal after Bravo had brilliantly saved from Nolito's volley.

And they needed one last miracle from Alvarez to seal the three points as he turned behind a fierce effort from Suarez five minutes from time.

Earlier, Real Madrid moved to the top of the table for the first time this season after goals from Cristiano Ronaldo, Karim Benzema and a James Rodriguez double.

It took Ronaldo just 100 seconds to register his 22nd goal of the season when he swept home Benzema's cut-back to punish some lax Granada defending.

There was nothing the hosts could do as Rodriguez doubled Madrid's lead nine minutes before half-time, though, as the Colombian unleashed a sumptuous dipping volley into the far corner.

Ronaldo returned the favour to Benzema as he slotted home the third early in the second-half before Rodriguez forced home his second of the afternoon from close range four minutes from time.

"We need to keep working to keep this run going," said Real boss Carlo Ancelotti after seeing his side hit 46 goals over their last 11 games.

"Rodriguez scored a fantastic goal, but so did Ronaldo from another Benzema assist. It is becoming hard to talk about Ronaldo because there are no words left to describe him."

Atletico continued their own four-match winning run going as Antoine Griezmann struck his first two league goals for the club.

The French international was fortunate with the opening goal as his shot took a wicked deflection off Luso and flew into the far corner.

Cordoba were level just eight minutes into the second period as uncharacteristically slack marking from Atletico allowed Nabil Ghilas to head home at the back post from Fede Cartabia's corner.

However, Griezmann's powerful header had too much for Juan Carlos at his near post to restore Atletico's advantage just five minutes later before Mario Mandzukic and Raul Garcia then made the game safe from two excellent Koke crosses.

Ghilas restored some pride for the visitors by volleying home his second goal of the game three minutes from time, but the Andalusians remain without a win after 10 games on their return to the top flight.