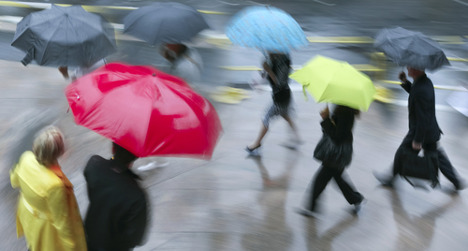 Temperatures are set to plummet and come in line with averages for this time of year. Photo of rainy day: Shutterstock

For many parts of Spain, October has been warmer than usual, with people making the most of the sunny conditions to stretch out the summer as long as possible.

From Friday, however, cafés around the country could start bringing in their tables: three successive cold fronts are now forecast to sweep across the country bringing plenty of rain and even snow to mountain areas over 1,200 metres (3,900 feet).

The first front will hit Galicia on Friday bringing rain and colder temperatures to the northeast of the country on Saturday, Spain's 20 minutos newspaper reported.

A second front is to deliver wet weather to much of Spain on Sunday and Monday with the most persistent downpours in Galicia, along the north coast, and in the Pyrenees. The Canary Islands can also expect some rain.

Monday will see the arrival of the third and 'coldest' front, with "abundant rainfall" affecting most of peninsular Spain and the Balearic Islands. That is the front which will also bring snow.

Temperatures will also drop 6–9C, bringing them inline with averages for this time of year.