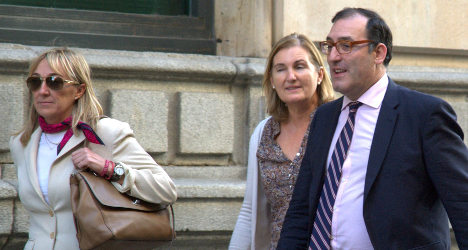 Spanish High Court judge Eloy Velasco arrives at the National Court in Madrid on Thursday, during a hearing in an alleged corruption scandal involving local government construction contracts. Photo: A

It is the latest in a string of high-level corruption scandals to hit the ruling Popular Party (PP) and has piled pressure on Prime Minister Mariano Rajoy a year ahead of a general elections, in which Spain's two-party system is threatened by a third major force in the form of the country's new Podemos party.

Among those charged in the scandal is Didier Maurice, chairman in Spain for Cofely, a subsidiary of French energy giant GDF Suez, who is suspected of fraud and bribery, according to a written court ruling on Thursday.

Police arrested dozens of people on Monday over suspected kickbacks for public work contracts worth roughly €250 million, including alleged deals by Cofely.

On Thursday Judge Eloy Velasco at the National Court in Madrid ordered five suspects to be remanded in custody, set bail for eight others and charged and released one, according to two written rulings seen by news agency AFP.

Among those in custody is the former Madrid secretary general for Spain's ruling Popular Party Francisco Granados. Judge Velasco on Friday sent Granados to prison with no possibility of bail while he investigates the politician in connection with money laundering, organised crime and misuse of public funds, among other offenses.

The judge set bail for Maurice and another Cofely manager at €100,000 each and detained a third without bail while the investigation continues.

That brought to 26 the number of people so far placed under judicial investigation after 12 others were named when the closed-door hearings in the court began on Wednesday.

Rajoy has apologized publicly for the scandal but insists justice will run its course. In 2013 he apologized and resisted pressure to resign in a separate scandal over alleged secret payments to PP members.

Overall 38 people have been arrested in the latest affair, including Francisco Granados, formerly a senior member of the Madrid PP regional government, and four PP mayors.