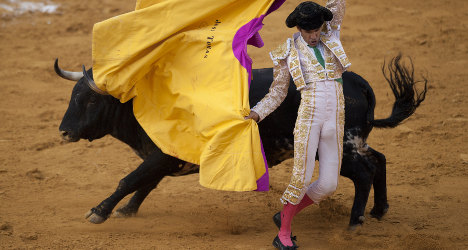 A bullfight in Malaga in August. File photo: Jorge Guerrero/AFP

During his career as a bullfighter, Rafael de Paula was renowned for his grace and elegance.

In 2002, he was even awarded the Spanish culture ministry's Fine Arts Gold Medal for his services to the arts, with Spanish writer Antonio Gala saying: "In his bullfighting, there's a subtle silent music".

But there was nothing subtle in the 74-year-old's performance in the offices of his lawyer on Thursday. According to Spain's El Mundo newspaper, the ex-bullfighter (real name Rafael Soto Moreno) appeared in his lawyer's offices in the southern Spanish city of Jerez with a hoe.

He then insulted the lawyer, and even threatened him with dead. The lawyer then called the police, but when officers turned up de Paula allegedly attacked them with his walking stick.

After the incident, the former bullfighter was taken to a local police station. He was expected to appear before a judge shortly, El Mundo reported.

The cause of the dispute between de Paula is not known.