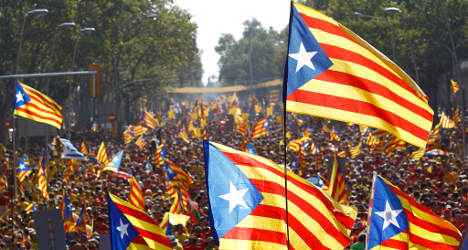 Spain’s Cabinet decided on Friday to appeal to the Constitutional Court against the legality of the vote on Catalan independence due to be held in just over a week, the newspaper El País has reported.

This is the latest move in the game of chicken between Spain’s conservative central government and Catalan President Artur Mas over the latter’s desire to hold a consultation on independence for the wealthy northeastern region.

After the Constitutional Court formally suspended the initial referendum set for November 9 following a government appeal, Mas announced that his plans for an official poll could not be carried out, but he said a less formal consultation could still take place. Volunteers have registered to oversee the ballot for which there will be no official census, with each voter proving eligibility and their name being entered into a database to prevent multiple voting.

Voters are to be asked if they think Catalonia is a state and, if so, whether it should be independent.

Prime Minister Mariano Rajoy’s government had asked the State Council consultative body if it thought there were grounds for a legal appeal against the new Catalan consultation. The answer came back that the vote was even less legitimate than the former plan as it lacked basic democratic “guarantees”.

The government’s argument is that the vote is unconstitutional as only the state can call referendums and that Mas’s independence “consultation” or “participatory poll” is a referendum by another name.

According to an opinion poll carried out by the Catalan administration’s CEO survey agency, 49.4 percent of the region’s citizens would have voted yes to independence in the original referendum since suspended by the Constitutional Court. Allowing for abstention, the survey team said this meant that the result would have been a victory for independence supporters.

In the same poll, 64.2 percent said they were in favour of Catalonia being a state, with 49.2 percent backing full independence.