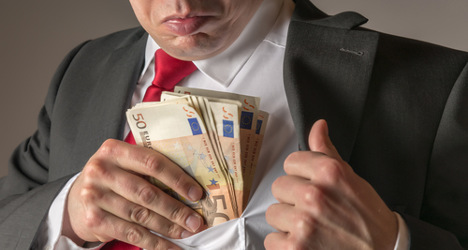 If you were to put together an A to Z of Spanish politics, the letter 'c' would have to be reserved for corruption.

Unfortunate as it is, public life in Spain has been dogged by shady deals of all kinds in recent years. From allegations of illegal funding of political parties to more run-of-the mill bribes and backhanders to local bigwigs, news about illegal activity has become depressingly commonplace.

On Monday, Spanish police lifted the lid on yet another kickbacks scheme, making around 35 arrests nationally as they investigated politicians and public officials over allegations they pocketed cash in exchange for political favours.

For fed-up Spaniards, it was all to familiar. It also came hot on the heels of another scandal involving the use of secret credit cards by top executives at two major banks.

As a sign of how sensitive the situation is right now, Spanish Prime Minister Mariano Rajoy — whose own party has seen high-profile members targeted by judges — even apologized.

But the latest scandals are just the tip of the iceberg as the country's judges struggle to wade their way through millions of pages of evidence and wrap up corruption cases which have struck virtually every region and several of the country's largest political parties.

To help you make sense of it all, The Local has compiled a list of the major corruption scandals in recent years, covering everything from slush funds to Swiss bank accounts.