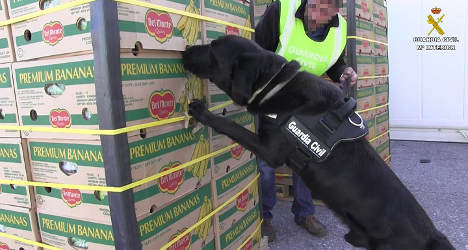 Police said the suspect had been on the run since being sentenced to 17 years in jail in 2006 for drug smuggling and other crimes. Photo: Guardia Civil

The authorities said they opened their investigation after police with sniffer dogs uncovered 54 kilos (120 pounds) of high quality cocaine hidden inside boxes of bananas as they were being unloaded at the port of Marín in the northwestern region of Galicia.

Officers arrested six people who came to pick up the cocaine as well as three others in the southern town of Dilar who were allegedly part of the ring that organized the shipment, a statement said.

The detainees included the leader of the drug smuggling ring, identified only as Antonio Manuel B.I., a Spanish national described by police as "one of Spain's top drug dealers".

SEE ALSO: Why do Spaniards love cocaine so much?

Police said the suspect had been on the run since being sentenced to 17 years in jail in 2006 for drug smuggling and other crimes.

He was detained in Spain in 2001 on suspicion of being part of a ring trying to smuggle more than 1,000 kilos of cocaine out of Colombia.

"In addition to using false documents, technological systems to prevent his communications from being intercepted and bodyguards, he also frequently changed his physical appearance," the statement said.

Three other Spaniards were arrested along with a Russian, a Colombian, an Argentinian, a Peruvian and a Mexican in the probe into the cocaine found in the banana shipment.