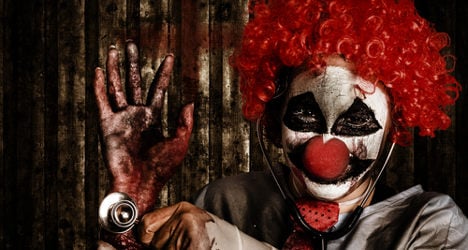 Coulrophobia, or fear of clowns, has swept across France in recent weeks. Photo of scary clown: Shutterstock

Spain's self-styled 'Gijónclown' — he even has his own Instagram account with nearly 5,000 followers — is the latest manifestation of a social media-driven phenomenon which has seen French police arrest over a dozen teenagers who dressed up as clowns carried weapons and even beat people up.

A photo posted by GijonClown on his Instagram account on Wednesday. "Am I the bad clown?" he asks.

With coulrophobia, or fear of clowns, sweeping across France, vigilantes have taken to the streets to try and stop the pranksters.

After Facebook reports that one aggressive clown was threatening people in the centre of the eastern town of Mulhouse, five youths took it up themselves to hunt down the joker.  Armed themselves with baseball bats, knuckle dusters, a hammer and a canister of tear gas, they went in search for the fake clowns, intent on meting out their own form of punishment, but police thwarted their attempts.

Police in France have now warned they will not tolerate violence — either from people dressed as clown or from vigilantes.

Now the strange phenomenon with roots in the UK and the US — which may or may not have something to do with the approach of Halloween — has made its way to Spain, with people in Gijón reporting sightings of a clown on the streets of the sight at night, according to Spain's 20 minutos newspaper.

Described by one witness who saw the clown in the early hours of the morning as being of "medium height", the prankster was also said to be "unarmed" but acting in a "sinister" fashion.

On his Instagram account, Gijónclown asks: "Scared of clowns? But we are the most friendly, nice and sociable people you'll meet. You'll find us at night".

For the witness  who spoke to 20 minutos though, the situation had a different complexion: "People will have their own opinion on whether it's good or bad, but I think there are a lot of people without a sense of humour who wouldn't find it very funny to run into such a figure at night."