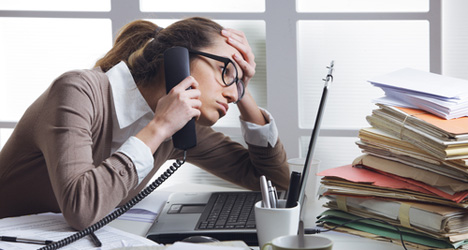 Despite reforms. starting a new business in Spain still takes longer, involves more procedures and is more expensive than in most other developed countries. Office ph

The World Bank Group’s Doing Business 2015 report looks at countries’ business regulations, including the ease of starting a business, paying taxes and trading across borders. A total of ten topics were examined in 189 global economies in the 2015 rankings.

It rated Spain 33rd overall in terms of doing business, behind most European countries but ahead of Italy, Greece and Luxembourg, and well up from the 52nd place it achieved in 2014.

Although regulations in Spain are not among the worst for existing businesses, would-be entrepreneurs still face a battle against bureaucracy to get their businesses started.

The World Bank report shows Spain 74th in the world for ease of starting a business, but praised it for cutting red tape and introducing reforms that have lifted the country from 115th place last year.

The results for Spain show that an average of six procedures have to be completed in order to register a new business in Spain, twice as many as in neighbouring Portugal.

Getting started takes an average of 13 days compared with an OECD average of just 9.2. In New Zealand, the category leader, it takes just half a day. The process is also considerably more expensive in Spain than in most other countries in terms of percentage of income per capita.

Despite this, Spain was praised for making a number of reforms to attempt to address its shortcomings. Referring to Spain, Italy, Portugal and Greece, the report noted, " These economies, by actively reducing the complexity and cost of regulatory processes and strengthening legal institutions, are narrowing the gap with the regulatory frontier at a faster pace than the rest of the European Union."

Authors added, "Spain made starting a business easier by introducing an electronic system linking several public agencies and thereby simplifying business registration" and noted that the country had "made transferring property easier by reducing the property transfer tax rate".

One of the areas where Spain ranked best was in resolving insolvency (23rd), where it has been forced to become more efficient in order to process the increased number of cases resulting from the economic crisis.

As a whole, governments the world over were found to have implemented a range of reforms over the past year to improve business conditions. Sub-Saharan Africa carried out the largest number of business reforms – 75 in total.

Singapore, New Zealand and Hong Kong took top places in the World Bank rankings while Denmark was rated the best place in Europe to do business, coming in fourth.

Rita Ramalho, the lead author of the Doing Business report, discusses the survey’s results in the video below:

PARTNER CONTENT
Making Waves: Female entrepreneurs having an impact in 2022

PARTNER CONTENT
VIDEO: Meet the people who are living the ‘Swedish dream’
Url copied to clipboard!