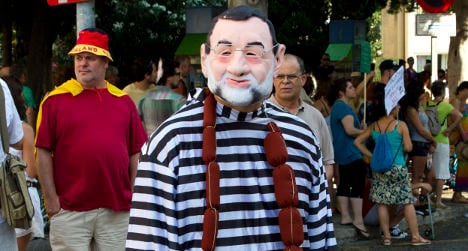 The allegations that suspects including top members of the ruling Popular Party awarded companies infrastructure contracts in exchange for bribes are just the latest in a string of damaging corruption scandals for the Spanish government.

Of the around 51 suspects named in connection with suspect deals worth €250 million ($318 million), 17 have now been summoned to appear before a judge, the judicial source said.

At least five were due to appear at the National Court in Madrid on Wednesday — among them Didier Maurice, chairman in Spain for Cofely, a subsidiary of French energy giant GDF Suez.

The other four suspects are mayors of Spanish towns and an IT boss for the Madrid regional government.

French energy services provider Cofely and its Spanish subsidiary are alleged to be the main beneficiaries of the suspect deals to award contracts, with just one such deal in the Madrid town of Parla worth €54.7 million.

The press department of the firm which specializes in projects aimed at increasing energy efficiency declined on Wednesday to comment on the case.

Prime Minister Mariano Rajoy apologized in parliament on Tuesday for the corruption scandals involving members of his conservative party — a move seen by many as too little, too late.

On Wednesday, Spain's Socialist opposition leader Pedro Sánchez hijacked a planned debate on Spain and Europe and demanded explanations on corruption cases affecting the government, while calling on Rajoy to outline measures to combat corruption.

"You are besieged by corruption," the new opposition front man said.

Rajoy then waited until after the planned discussion on Europe had taken place before  attempting to turn the tables on Sánchez by highlighting the massive 'Ere' fraud case in Socialist-run Andalusia.

This long-running case has seen dozens of politicians, businessmen and union officials implicated in a scandal in which people received illegal payments from a government fund set up to help companies pay out laid-off workers.

Two Socialist ex-presidents of the region are due to appear before the Supreme Court over the scandal, the prime minister reminded the opposition leader.

"Are you going to apologize?" Rajoy asked Sánchez.

Rajoy then also repeated his 2013 offer of a cross-party pact on corruption. "I have said sorry and offered explanations. You haven't done either of those things. I would like us to be able to come to a mutual agreement," the prime minister was quoted as saying by El Mundo newspaper.

"I ask you not to hold up the image of a Spain submerged in corruption because it's not true," Rajoy said.

Other politicians also took potshots at Rajoy during a fiery parliamentary session. "The people have had it up to here, and are furious," said Cayo Lara, the spokesperson for Spain's United Left (IU) party.

"The virus of corruption has entered the guts of the system, the corruption is systemic," he said, calling on Rajoy to dissolve parliament and call elections.

The latest kickbacks probe is the latest in a string of corruption scandals that have hit Spain's political parties, banks, football clubs and even members of the royal family.

It comes on the heels of a credit card scandal that has implicated former International Monetary Fund head Rodrigo Rato, a stalwart of the Popular Party and a former finance minister.

The scandals have hurt mainstream parties in the opinion polls ahead of a general election due next year.