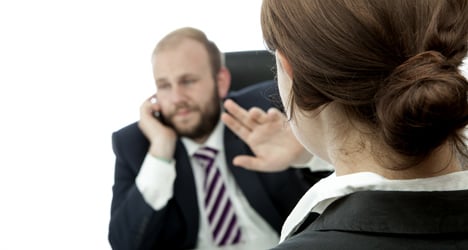 Spain ranked only 84th in the world in terms of equal economic participation and opportunities between men and women. Office photo: Shutterstock

When the World Economic Forum analysts began to rank gender gaps in 2006, Spain was one of the 11 most gender-equal countries of the 142 included in the study.

In Europe, only Greece has performed worse, dropping 22 places in 8 years, according to Spanish daily El Diario.

The Global Gender Gap 2014 aims to understand whether countries are distributing their resources and opportunities equitably between women and men, irrespective of their overall income levels.

It measures the size of the gender inequality gap in economic participation and opportunity (such as in salaries and leadership), education, political empowerment, and health and survival in terms of life expectancy and sex ratio.

Spain came 23rd in the world in terms of political empowerment but, according to the report, "has had the most significant drop in the region compared to 2006 due to a drop in the female-to-male ratio of women in ministerial positions".

Despite this, the report noted, "Spain improved its female-to-male ratio of women in parliament compared to last year and enters the top ten best countries on this variable. Spain has also had one of the biggest improvements in the labour force participation female-to-male ratio over the past nine years."

Spain was among the five countries with the highest mean age of women at the birth of the first child (30 years old) but ranked only 87th globally in terms of health and survival for women.

It also fared poorly in the category of economic opportunity and participation, ranking only 84th.

Watch a video about the Global Gender Gap Report:

Overall global gender equality has narrowed only fractionally in the last nine years. At the current pace, the report noted that women "will have to wait a further 81 years for gender parity in the workplace".

This is not the first study to highlight gender inequality issues in Spain.

An EU report earlier this year revealed that Spain was one of only a few in the EU where wage inequality was on the rise.