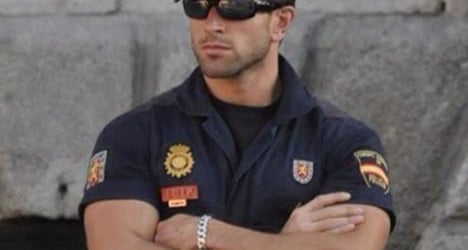 The image of the agent dubbed 'brazacos' (Mr Biceps) accompanies a tongue-in-cheek Instagram message which reads: "You and your security needs are our reason for being. If you need us, call us! 091 Police".

The picture of the officer who can't be identified for security reasons has received 2,000 likes on the social media site since it was posted in mid-October.

But while it is the policeman's chiselled jaw and the bulging biceps which have caught people's attention, the message is also another illustration of the enormous success Spanish Police has had in reaching out to people.

The Policía Nacional Twitter account can now boast of 1.16 million followers, or more than US Federal Bureau of Investigations, largely thanks to the efforts of Carlos Fernández Guerra, the force's social media manager.

In early 2013, for example, his team captured plenty of attention when they tweeted tips on smuggling drugs to a Spanish cultural magazine.

Even though the Policia Nacional's award-winning social media team rounded off the — now deleted — conversation by saying "you still risk a penalty for public consumption", the message caused a Twitter storm and won them more followers.