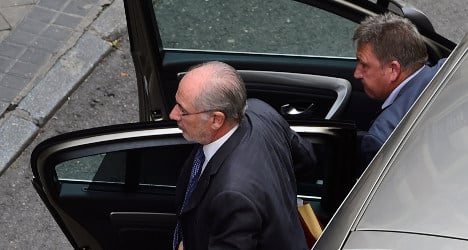 Rato and more than 80 others face possible charges of corporate crimes over allegations that they spent a total of €15 million ($19 million) on nightclubs, safaris and other luxuries using secret company credit cards when they worked at Caja Madrid and the Bankia group.

"The committee of rights and guarantees of the Popular Party met this afternoon and has expelled all of its members affected by the Bankia/Caja Madrid credit cards," the party said in a statement.

The main opposition Socialist party had immediately expelled its party members who were caught up in the scandal and has regularly lambasted the Popular Party for failing to do the same.

The scandal has fuelled indignation in Spain, where one in four workers is unemployed.

It has also embarrassed Prime Minister Mariano Rajoy's conservative party ahead of a general election due in 2015 and sparked a string of high-profile resignations.

Rato chaired savings bank Caja Madrid before it was merged with others in 2010 to form Bankia, the group whose near-collapse sparked a €41 billion ($52-billion) bailout for Spain's financial sector and caused thousands of customers to lose their savings.

From 2004 to 2007 he was managing director of the International Monetary Fund, the global lender that played a leading role in tackling the eurozone finance crisis.

When questioned in court earlier this month, Rato denied any wrongdoing and said the credit cards were for discretionary spending as part of the pay deal for executives in Caja Madrid, part of the Bankia group.

Monday's announcement also came on the same day several politicians were arrested in high-profile anti-corruption raids targeting participants in a kickbacks scheme in which politicians and public officials allegedly received bribes from businessmen for political favours including awarding building contracts and rezoning land.

Among those arrested was the the former secretary general of the Popular Party for Madrid, Francisco Granados.

Both the PP and the opposition PSOE said they would temporarily suspend the membership of party members named in the investigation.