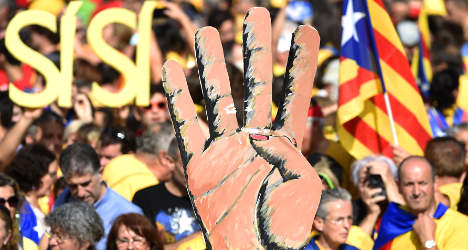 Members of Omnium Cultural and the National Assembly of Catalonia demonstrate in support of the independence referendum planned for November 9th in Barcelona on October 19th. Photo: Lluis Gene/AFP

Catalonia's president Artur Mas watered down his plans for a November 9th referendum on breaking away from the rest of Spain, after the Spanish government launched a legal challenge at the Constitutional Court.

Mas had planned a kind of official non-binding referendum, but has now downgraded that to a symbolic vote organised largely by volunteers, over concerns the vote would lack legal validity.

Spanish Prime Minister Mariano Rajoy's conservative government on Monday asked the Council of State, an advisory body, for its opinion on this new consultation, a first step towards challenging the new vote in the Constitutional Court, the government said in a statement.

The government has asked the Council of State to issue its ruling quickly so a decision on how to respond to the Catalan vote can be made during the next weekly cabinet meeting, which is expected on Friday, the statement added.

The Catalan government has said 5.4 million Catalans aged 16 and over will be eligible to vote, along with certain foreigners resident in the region and Catalans living abroad.

About 1,255 voting stations will be set up across nearly all of Catalonia's more than 900 municipalities and in 17 foreign cities, it said.

Provisional results will be available from November 10th.

After the Constitutional Court suspended Catalan legislation aimed at legitimizing a referendum, the regional government said the new-format vote would not have a formal electoral roll but participants would sign up on an unofficial register.

There will be no formal electoral supervisory authority and no international observers will monitor the vote officially.

Mas's compromise has not gone down well with Catalan's pro-independence camp, with opposition parties demanding a snap regional election if he failed to deliver on the planned referendum.

Proud of their distinct language and culture, Catalonia's 7.5 million inhabitants have increasingly been demanding greater autonomy over recent years. The region accounts for nearly a fifth of Spain's economic output.