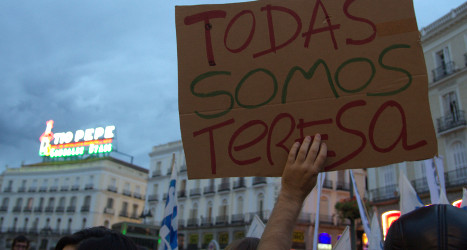 A protester with a placard reading "We are all Teresa" during a demo in support of Spanish nurse Teresa Romero infected with Ebola. Photo: Curto de la Torre/AFP

"They laughed at us, they treated us like scum," said Romero's huband Javier Limón in an interview with Spain's El Mundo newspaper.

"They destroyed our life, they killed our dog, and they nearly killed my wife," said an angry Limón who left Madrid's Carlos III hospital on Monday morning after three weeks in isolation.

"On top of all that, this guy comes out and says that my wife — who volunteered (to treat two Ebola-infected Spanish missionaries who were repatriated to Spain) — is a liar, that she lied about her fever," said Limón, referring to controversial comments by Madrid's regional health chief, Javier Rodríguez.

"I said she might have lied because she’s hidden information (about her health) and taken days to admit she’s made a mistake," Rodríguez said on Spanish radio Antena 3 in early October.

The health official also suggested Romero had been responsible for contracting the disease herself when he said: "You don’t need a Masters to learn how to put on and take off a suit" and "Some people are better at learning than others".

But Limón has now strenuously denied Romero — the first person outside Africa to have contracted the virus — had lied about her symptoms, saying she taken her own temperature and this was within acceptable limits before finally visiting a medical centre seeking treatment.

The husband now plans to take legal action against Rodríguez for sullying his reputation and that of his wife.

In his interview with El Mundo, Limón also took aim at Spain's health minister Ana Mato, saying, "If the job's too big for her, and she doesn't know how to do it, she should resign."

Mato was unofficially demoted from overseeing Spain's health crisis when Spain's Deputy Prime Minister Soraya Sáenz de Santamaría was appointed the head of an emergency government committee to deal with the control of the virus.

Doctors in Madrid recently took to the streets calling for Mato to quit, protesting against he poor management of Spain's Ebola ciris.