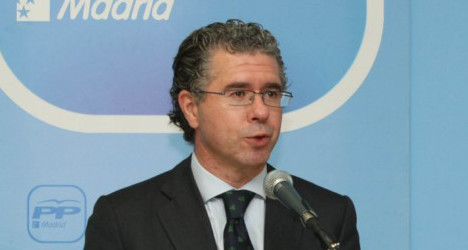 Spain's crackdown on corruption continued on Monday with a major raid on politicians, public officials and businesspeople.

Francisco Granados, the former number two in Madrid's Popular Party was the highest profile figure to be detained in the sting operation targeting people allegedly involved in a kickbacks scheme which saw public officials take under-the-table payments for political favours.

To date, 37 people have been arrested in the massive ongoing operation, which focuses chiefly on suspected corruption in Madrid, Murcia, León and Valencia, with the total number of people named in the investigation at 51.

Businesses involved in the scheme were awarded contracts worth roughly €250 million ($317 million), the statement added. Crimes now being investigated include money laundering, forgery, bribery and illegal negotiations by public officials, among others.

When the politician, also formerly a Spanish senator, went to withdraw all of that money in 2012, Swiss authorities reported the sum to Spain, the daily added.

The existence of the account was first reported by Spain's El Mundo newspaper in February with the paper noting the account had come into existence shortly after the politician gave up his job as a stoke broker to become the mayor of the Madrid municipality of Valdemoro.

A judge now believes that money may have been paid as bribes by constructors in exchange for favours including awarding of building contracts and the rezoning of land.

Granados — also linked to Spain's long-running Gürtel corruption case — initially denied the existence of the Swiss account but later admitted he held it from 1996 to 2000, or before he entered politics. He resigned from all his political positions over the scandal.

Among those also arrested in Monday's raids were six Madrid mayors and head of the provincial authority of León, Marcos Martínez Barazón, who only took on the role five months ago, after his predecessor Isabel Carrasco was gunned down on the street.

Another person named in the investigation is a police officer who allegedly informed Granados he was being investigated.

Spain Popular Party said it would suspend the membership of party members arrested and would call for them to resign. Spain's major opposition party, the socialist PSOE did likewise.

Sources close to the investigation have not ruled out further arrests of politicians, according to 20 minutos newspaper.

Monday's mega raid is the latest corruption news to hit the headlines, and comes just after it emerged top executives at Spain's Caja Madrid and Bankia banks were issued "phantom" credit cards to make private purchases.  Spain's public prosecutor says none of this spending was reported to tax authorities.

Fingered in the scandal is Rodrigo Rato, a former head of the International Monetary Fund and a member of Spain's ruling PP.