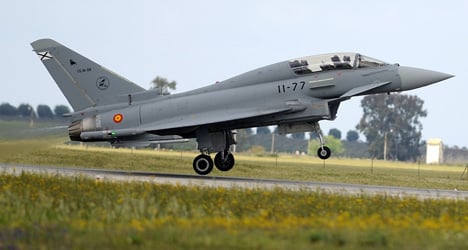 Most of Spanish Eurofighters (like the one shown here being landed by King Felipe VI) are said to be non-operational due to a lack of spare parts and delayed inspections. Photo: Cristina Quicler/AFP

According to Spanish daily El Confidencial Digital, unnamed military sources have warned that the Eurofighter Typhoon air fleet is crippled by breakdowns, lack of spare parts and delayed inspections.

The claims come just a day after Spain announced plans to pump €10 billion ($12.7 billion) into new defence programs after six years of cutbacks as a result of the economic crisis.

Eurofighters were not, however, named in the list of projects due to receive a funding boost.

The investment will instead go towards the new F-110 frigates, drones, and the infamous S-80 sinking submarines.

Only six Eurofighters in Spain's Quick Reaction Alert (QRA) service in bases at Morón de la Frontera and Albacete are currently capable of taking off, according to military insiders. These jets are kept ready to scramble 24 hours a day, year-round, to intercept suspicious aircraft in Spanish airspace.

The rest of Spain's Eurofighter planes have allegedly been grounded by breakdowns, missing spare parts and queues for inspections after reaching the maximum number of hours in the air.

The Eurofighter Typhoon was jointly developed by the UK, Spain, Germany and Italy.

Germany recently reported a manufacturing defect in the Eurofighter's fuselage which could lead to in-flight instability. It grounded its planes and launched an investigation but Spain chose instead to order its mechanics and pilots to  perform pre-flight inspections.

In June, Spain's foreign minister José Manuel García Margallo claimed that four Eurofighters would be sent to the Baltic region as part of the country's NATO commitments. But because of the condition of the Eurofighter fleet, sources inside the military claim that ageing F-18 fighter jets were being prepared to be sent instead.

Official Ministry of Foreign Affairs sources denied this and insisted that Spain would still be able to send Eurofighters as originally intended. They also denied the existence of any shortage of spare parts.