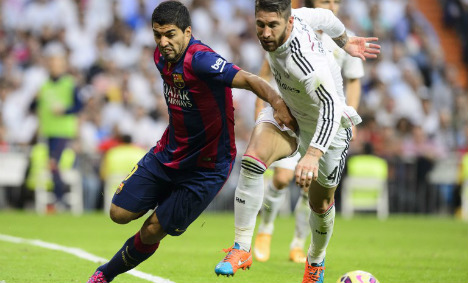 "I am very happy to return to playing, it is a great relief to have this time behind me," said Suarez, who was substituted after 68 minutes.

"The feeling is bittersweet because of the result, but this team has lifted itself many times before."

It took the Uruguayan just three minutes to make an impact as he set up Neymar for the opening goal.

But after Cristiano Ronaldo had levelled from the penalty spot 10 minutes before the break, Barca were blown away in the second-half by goals from Pepe and Karim Benzema.

"Obviously what everyone wants on a debut is a victory, even more so in a game of this magnitude. I think that we did everything we could to get a good result, but it wasn't to be," added Suarez.

"We need to forget this game and think about our next opponents.

"After they equalised to make it 1-1 we controlled the game, we had chances to score and it's always difficult if you don't take your chances. In the second-half they surprised us with their speed on the counter and killed the game.

"We have to move on and think about our next opponent, we are still a point ahead of Real Madrid."

Barca boss Luis Enrique claimed he had no regrets about throwing Suarez back into the thick of the action.

"I don't regret it at all," said Enrique.

"He did more than I expected. He played more and with rhythm. We brought him off because it is very difficult to play the 90 minutes after such a long time."

However, Enrique admitted Madrid had been deserving winners on the day.

"We started well, but as soon as we scored they started to create chances.

"There was a period where we could have made it 2-0, but in the second-half they punished us at the key moments and deserved to win the game."

Barca's only two defeats this season have come in their two real tests away at Madrid and Paris Saint-Germain in the Champions League.

And Enrique recognised they needed to cut out the sloppy errors that had cost them against top opposition.

"This shows clearly that there are opponents just as good if not better than us, as was the case today. We need to rectify that because the errors allowed them to win clearly."

A ninth consecutive victory in all competitions for Madrid moves them back to within a point of Barcelona at the top of the.

Real boss Carlo Ancelotti lauded his side's calm reaction to falling behind so early on.

"We didn't lose our head after losing the early goal," said the Italian.

"I liked many things about the team, above all the high tempo we played with. The team recovered well with just two days rest after Wednesday and played very well."

"The team was incredible in all aspects and positions, despite the goal we conceded," said the Spanish international.

"We were very clear in our ideas, and we dominated not only in possession but on the counter-attack. It was a complete performance."