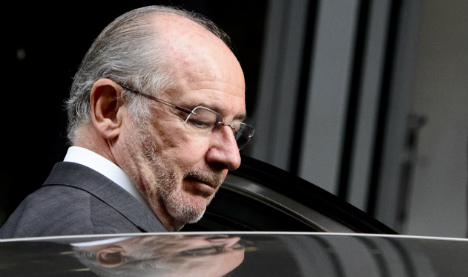 The 65-year-old former finance minister was hailed for kicking off a golden decade of growth in Spain's economy from the late 1990s and later led the International Monetary Fund.

Now, six years after the financial crisis started, the toxic fallout from it has landed him in court and turned him into a hate figure for many ordinary Spaniards.

On October 16th a judge questioned him over alleged spending sprees on company credit cards by him and other ex-managers in the bailed-out finance group Bankia.

He had already been questioned on suspicion of fraud in an ongoing probe into the stock market launch of Bankia, which was rescued by the Spanish government in 2012.

He has denied wrongdoing in both cases.

The charges now hanging over him reflect "the great decline, the great downfall of the professional and ethical icon that was Rato".

The prime minister at the time, Jose Maria Aznar, in 2010 called Rato the "best economy minister" in Spain's modern history.

But when asked by reporters about him after the credit cards revelations this month, Prime Minister Mariano Rajoy would not even speak Rato's name.

The allegations that Rato and more than 80 others spent a total of more than €15 million, reportedly on luxuries such as nightclubs and safaris, embarrassed Rajoy's Popular Party (PP) and sparked a string of resignations.

"It alarms and outrages us," said the current leader of the party, Maria Dolores de Cospedal, who just last year had called prominent PP member Rato "the star of Spain's economic miracle".

Rato was thought a natural successor to Aznar and was expected to run for prime minister in 2004, but mistimed his bid. Rajoy beat him to the candidacy but lost the election.

He left the IMF in 2007 for "personal reasons" and was later handed the job of managing Caja Madrid, one of the regional savings banks that fused to form Bankia in 2010.

He oversaw the stock market listing of Bankia in 2011, seen as a triumph after the previous three years of financial turbulence. But the euphoria did not last.

In May 2012 the government had to nationalise Bankia to save it from ruin. Spain then had to turn to the eurozone for a €41-billion euro bailout to save its whole banking sector.

Seven months after Bankia was rescued, Rato found himself walking into court for questioning. Furious customers who said the bank had lost their savings yelled at him: "Thief! Go to jail!"

The scene was repeated last week when he went before a judge over alleged corporate crimes in the credit card scandal. The court made him pay a three-million-euro bond while it investigates further.

"The impact of the charges is much bigger this time round," said political expert Rubi.

"In 2012 all we knew was that Bankia had been badly managed. Now we know it was badly managed by people with no scruples, ethically speaking."

The credit card affair has damaged not only Rato's image but that of his party ahead of regional elections due next year, Rubi said.

In a previously "unthinkable" move, Rato has suspended his membership of the PP.

"He has no political future," said Rubi. "There is a feeling that Rato has destroyed his shining reputation. He had a halo of superiority and triumph everywhere he went. Now he has fallen."