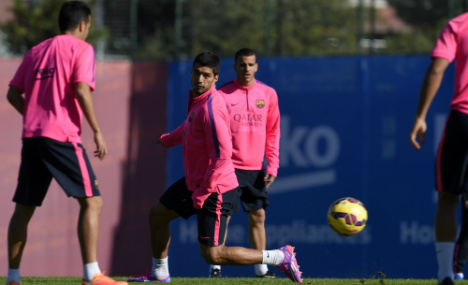 The most expensive player in Barca's history is finally free to play for his new club at the Bernabeu after serving a four-month ban for biting Italian defender Giorgio Chiellini at the World Cup in June.

"I think all the bad things I have been through are in the past," Suarez told The Guardian.

"I believe I am on the right path now, dealing with the people who can help me, the right kind of people."

Suarez's questionable temperament is likely to be tested by the red-hot atmosphere at the Bernabeu.

As well as his latest bite on Chiellini, the 27-year-old received lengthy suspensions for biting Chelsea defender Branislav Ivanovic last year and Otman Bakkal of PSV Eindhoven whilst playing for Ajax.

"Everyone has different ways of defending themselves. In my case, the pressure and tension came out in that way."

"There are other players who react by breaking someone's leg, or smashing someone's nose across their face. What happened with Chiellini is seen as worse. I understand why biting is seen so badly."

However, Suarez remains bitter about the other major controversy of his time in England when he was banned for eight matches after being found guilty of racially abusing Patrice Evra during a match between Liverpool and Manchester United in 2011.

"I know I was wrong with the biting and the diving but I was accused of racism without any proof," said the 27-year-old.

"There were lots of cameras, but no evidence. It hurts me the most that it was my word against theirs."

Suarez addressed Evra as "negro", a world commonly used in his homeland when speaking to black people.

"Every culture has its way of expressing itself, and that's a word people in Uruguay use all the time, whether somebody is black or not black.

"It gets used a lot without those connotations, and that's why it is completely different to how it is expressed in England, no?"