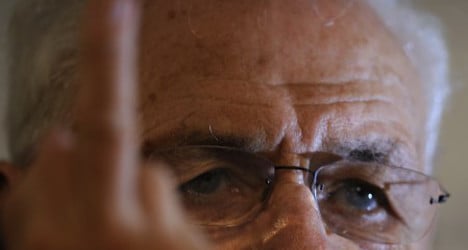 The 85-year-old creator of the Guggenheim museum in Bilbao responded grumpily to reporters' questions in Oviedo, northern Spain, a day before he was to be handed the Prince of Asturias prize by King Felipe VI.

In the first question at a news conference there on Thursday, a journalist asked Gehry: "What is your response to those who call your work 'architecture for show'?"

Gehry — whose latest spectacular building, the Louis Vuitton Foundation in Paris has just opened to rave reviews — raised his middle finger without a word and took a sip of coffee.

A second reporter asked Gehry for his views on the social functions of architecture.

"In the world we live in, 98 percent of the buildings built are pure shit. There is no sense of design, nor respect for humanity, for judgement, for anything. They're just dumb buildings," he replied.

He said there were a small number of architects doing "special" work, but added: "For God's sakes just leave us alone… I work with clients who have respect for the art of architecture. Don't ask dumb questions."

Gehry won the €50,000 Prince of Asturias Award for the Arts for work that has "defined and furthered architecture in the past half century", the jury said in its citation.

Gehry is known for eye-catching buildings such as the Guggenheim, which helped regenerate the once down-at-heel northern Spanish city of Bilbao.

Born in Toronto, he took US nationality after moving to Los Angeles, where he is based.

The Prince of Asturias Foundation hands its arts prize each year for "a significant contribution to the cultural heritage of mankind", along with awards in seven other categories.

Among this year's other winners are the Irish novelist John Banville for literature, the New York City Marathon for sports and the US government's Fulbright scholarship programme in the international development category.