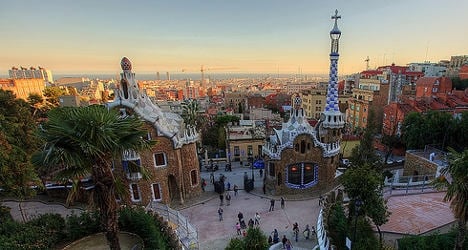 Park Güell was the last place in Barcelona where modernist architect Gaudí's work was free to see. Photo: Gylo/Flickr

Mission accomplished for Barcelona’s council; an extra hole in their pocket for visitors to the city. Park Güell, the small but beautifully formed garden designed by Antoni Gaudí, has gone from being trampled by nine million visitors a year to 2.3 million after the introduction of an €8 entrance fee in October 2013 for non-Barcelona residents.

Figures released on Friday by the park’s management and cited in Catalan daily La Vanguardia show 5.6 percent of visits are made by locals who pass through the green space on a daily basis free of charge.

Of the fee-paying remainder, 93.5 percent are foreigners, 0.5 percent Catalans from other parts of the region with the final six percent visitors from the rest of Spain.

The decision to introduce the entrance fee for non-locals was criticized by some Barcelona associations as well as tour operators who argued that it breaches European laws by discriminating between EU citizens.

Overcrowding was threatening the park’s heritage, however, as up to 1,200 people entered the grounds every 15 minutes before tickets were issued.

The growing popularity of Barcelona as a destination for international tourists has caused some stress and strain within a number of the city’s traditional venues. Earlier this year, managers at La Boqueria food market suggested that the number of group visits be limited at certain times, while residents of the Barceloneta neighbourhood have protested against the impact of mass tourism in the area.