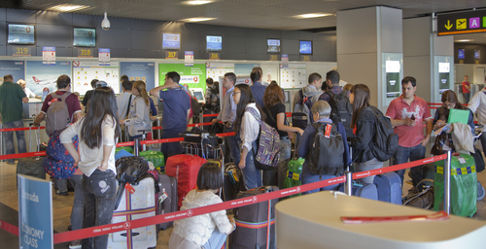 At 5pm on Saturday October 18th, police officers in the customs area of Terminal 1 at Spain's Madrid-Barajas airport reported that a man was lying trembling on the floor.

When airport medical staff arrived, they were told by security forces the passenger was a Nigerian resident in Spain who had just arrived on a Turkish Airlines flight from Istanbul, Spanish daily El Mundo has reported.

An agent with Spain's civil guard police force had positioned the man on his side and located his personal documents to identify him.

The airport medical staff decided immediately that there was a risk that this could be a case of Ebola. It later turned out, however, that the man was suffering the effects of a cocaine overdose after several bags of the drug had burst in his stomach, airport sources told El Mundo.

A passenger who was accompanying the Nigerian told authorities that he had flown from Madrid to Istanbul on October 14th and had not made any other stops during the journey.

The airport emergency care team decided to scramble a Health Ministry service which is on call in case of infectious disease suspicions.

A team from this external emergency service arrived at the area of Terminal 1 where the patient lay 50 minutes after being called, at 6.05pm, meaning that for more than an hour the Nigerian had been kept on the floor without receiving medical treatment.

Nobody had touched the man during that time due to fears that he might have Ebola, the disease which has killed 4,877 people, almost all of whom were infected with the virus in West Africa.

The specialists found the man "unconscious with a weak pulse and suffering breathing difficulties", and at 6.30pm declared he was not an Ebola risk. They ordered the Nigerian to be taken immediately to hospital without any quarantine procedures. At 6.55pm the man died.

According to medical experts, the only way to try to save a person in such a situation is emergency surgery to remove the drug packages.

While the man was lying on the floor, airport authorities had activated special health security procedures, preventing anyone from boarding the plane the patient had travelled on previously and clearing the area through which the Nigerian had disembarked.

When contacted, the man’s wife said that he had not visited Nigeria in the past four years.