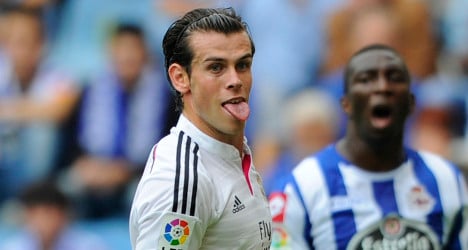 Real Madrid's Welsh forward Gareth Bale may not be missed given the outstanding quality available at the club. Photo: Miguel Riopa/AFP

The most star-studded game in world football will be missing one of its brightest lights at 6pm on Saturday as Real Madrid host Barcelona at the Santiago Bernabéu without the injured Gareth Bale.

It took the Welshman the best part of the three goes at the Clásico to make an impact, but he eventually did so in stunning style with an incredible solo run and finish to win Real their 19th Copa del Rey back in April.

Ajax coach Frank de Boer echoed the thoughts of many when he replied "Bale's absence is a shame for football" when asked for his view on the game after his side had been beaten by Barcelona on Tuesday.

However, as Madrid showed in dismantling Liverpool at Anfield 24 hours later without Bale, Sergio Ramos and Dani Carvajal, they have the depth in quality to cope even without world-class players.

Moreover, Real boss Carlo Ancelotti will be left with more than just memories of Bale's goal from the Copa del Rey final. Prior to that meeting at Valencia's Mestalla stadium, the Italian had gone nearly 10 years and seven games against the Catalans with three different clubs without tasting victory.

That night without the injured Cristiano Ronaldo, Ancelotti switched to a 4-4-2 formation from the 4-3-3 he has used for the majority of his time in charge at Madrid thanks to having the luxury of Ronaldo, Bale and Karim Benzema in attack.

Even with the famed "BBC", as they have become known in the Spanish press, Madrid were no match for Barça in their two league meetings last season. Barça's numerical advantage in midfield allowed them to dictate the tempo and cut the supply line to Madrid's front three.

At the Mestalla, even without World Player of the Year in Ronaldo, the introduction of Isco as an extra midfielder added the balance that Ancelotti craved.

"If Bale plays or doesn't play, it will change their way of playing a little, but not ours," Barça midfielder Andrés Iniesta said on Thursday.

"Madrid want to hit us on the counter-attack, whereas we want the ball because that minimises the danger."

However, with four gifted ball players in James Rodríguez, Luka Modric, Toni Kroos and Isco in midfield, Madrid may be able to turn the tables and use a greater share of possession to minimise the threat of Barcelona's star South American trio of Lionel Messi, Neymar and, possibly, Luis Suárez, who is now available after being banned from football for biting an opponent at last summer’s World Cup.

Just like last season it has taken Madrid some time to find the right blend after another busy summer in the transfer market before hitting their stride.

Following their defeat to Barcelona last October, the European champions embarked upon a 31-game unbeaten run before Barça visited the Bernabéu in March.

Similarly early league defeats to Real Sociedad and reigning Liga champions Atlético Madrid have left Ancelotti's men with a lot of catching up to do on Luis Enrique's rejuvenated Barcelona this season. But the win over Liverpool was their eighth straight in all competitions.

That run has included 35 goals, but crucially Madrid's previously leaky defence has also shored up, conceding just once in their last five games.

"We are in good form and showing how strong we are," said captain Iker Casillas.

"Despite the injuries, those that have come in are doing well. That is how we must continue. We need to win, win and win again."