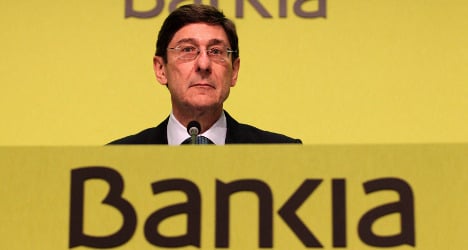 Two big Spanish finance groups, Bankia and Caixabank, reported rising profits on Tuesday in an encouraging sign for the sector two years after it nearly collapsed.

Bankia, which was bailed out by the Spanish government, said its net profits rose by 65 percent in the third quarter of 2014 from a year earlier to 266 million euros ($337 million), thanks to an increase in business and lower costs.

The bank said it had sharply reduced the number of bad loan debts weighing on its balance sheet — a legacy of the 2008 real estate collapse that plunged Spain into economic crisis — to 13.6 percent in the July to September period.

Bankia's chairman José Ignacio Goirigolzarri said in a statement that an "improvement in revenues, diminishing of costs and strong reduction in non-performing loans" would help it meet its 10-percent capital profitability target for next year.

Bankia's near-collapse in 2012 drove Spain to rescue it and then take a 41-billion-euro bailout from its eurozone partners to save other Spanish banks.

Courts are investigating alleged fraud in Bankia's doomed 2011 stock listing and this month the group was hit by another high-profile scandal when a judge questioned ex-managers of Caja Madrid, one of the regional savings banks that were merged to form Bankia, over allegations they spent lavishly with undeclared company credit cards. Former managers Rodrigo Rato, also a onetime managing director of the IMF and Popular Party minister, and Miguel Blesa have been ordered to pay multi-million-euro civil liability bonds or have their property embargoed.

Also on Friday, Caixabank said its third-quarter net profits more than tripled to 161 million euros compared to a year earlier. It said the improvement was partly due to it lowering its provisions — funds set aside to cushion a company from potential financial shocks. Caixabank also reduced its bad loan ratio to 10.5 percent.